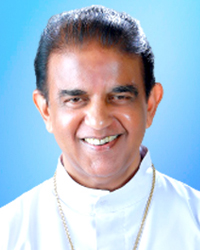 Mar Antony Kariyil was born on 26th March 1950 at Chalil in the Archeparchy of Ernakulam-Angamaly. Having made his first religious profession in the C.M.I. Congregation on 16th May 1967 and final profession on 16th May 1971, he was ordained priest on 27th December 1977.

Bishop Kariyil having a doctorate in Social Sciences, has worked as the Prior General of the C.M.I. Congregation, Provincial Superior of the C.M.I. Kalamassery Province, National President of the Conference of Religious of India, Principal of Rajagiri College of Social Sciences and Christ College, Bangalore.  Mar Antony Kariyil was professor and later Principal of Christ College (now Christ University), Bengaluru from 1978 to 1997. He was Principal of Rajgiri College of Social Sciences, Kalamassery from 1997 to 2002 and from 2011 to 2015 Director of Rajgiri College of Social Sciences, Rajagiri Business School and Rajgiri School of Engineering and Technology, Kochi. Mar Antony Kariyil was the Prior General of the CMI Congregation from 2002 to 2008 after which he served as the Provincial Superior of Sacred Heart Province, Kochi till 2011. Mar Antony Kariyil who holds Diploma in Kannada (Bengaluru University), Bachelor of Theology (Dharmaram Vidya Kshethram, Bengaluru), Licentiate in Philosophy (Jnana Deepam Vidya Peetam, Pune) and Ph. D in Sociology (Pune University), has several publications to his credit including three books: “Church and Society in Kerala: A Sociological Study”, “ Thiruvayassu” and “Suvarna Chinthakal”.

He was ordained bishop of the Eparchy of Mandya on 18th October 2015. On August 30th 2019, Archbishop Antony Kariyil was appointed the Vicar of the Major Archbishop for the Archeparchy of Ernakulam-Angamaly.