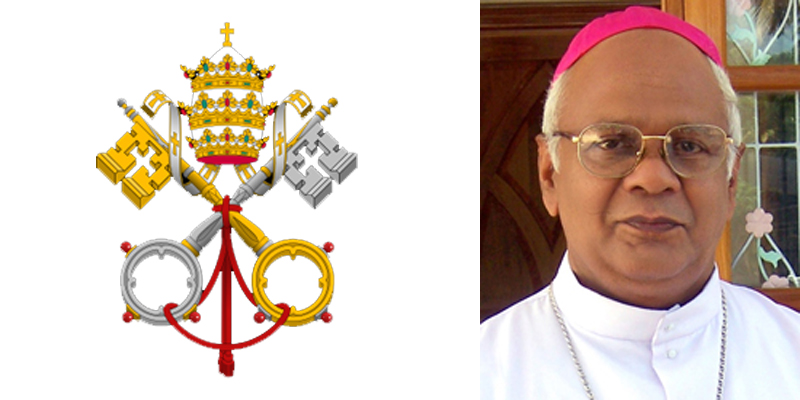 The Catholic Church in Kerala is a communion of three individual Churches; Latin, Syro- Malabar, Syro–Malankara. The Latin Church has eleven ecclesiastical units out of 29 dioceses in Kerala.

The presence of the Latin Church in India, particularly on the coast of Kerala has protracted over eleven centuries or more. However, the work of evangelization was enthusiastically revived by the western missionaries in the 13th century. The western records of the Franciscans and Dominicans contain the evidence of the early Latin Missions in India. Giovanni di Monte Corvine, O.F.M., Jordan Catalani, O.P., Odorico di Pordenone, O.F.M., and Giovanni di Marignolli, O.F.M., were the outstanding protagonists.

They testify the existence of Christian community at Mylapore and Quilon. Giovanni di Monte Corvino spent slightly over a year in Mylapore (1292-93) and other places on the Coromandel and Malabar coasts. Four Franciscans were martyred in Thana, near Mumbai, in 1321. Jordan Catalani de Sevrac, O.P., was the first resident foreign Catholic missionary in India.

Pope John XXII, in recognition of the zeal of Jordan, erected the Diocese of Quilon with the Cathedral Church on August 9, 1329, and nominated him as the first Latin Bishop of Quilon. The extent of the See comprised all the medieval mission regions of Indian and Southeast Asia. Odoric di Prodenone, O.F.M., and “Giovanni di Marignoli, O.F.M., who have come as Papal Legate to the East, in the 14th century, on their return journey stayed at Quilon for several months.

The arrival of the Portuguese missionaries came at the time of the exploration of the Malabar Coast by Portuguese traders in the 16th century, opening a new jurisdiction of the Portuguese Padroado in the field of Mission. Cochin and Goa became two main settlements of Portuguese in the 16th century. As a result, the City of Goa was erected as suffragan to Lisbon. The first Bishop in India was Joao Alfonso de Albuquerque, O.F.M., who arrived in Goa in 1538. By 1557 Goa became an Archdiocese with Cochin and Malaca as suffragans. This was at the height of the famous Padroado of the Portuguese. Aside from communities of Christians in Goa, Cochin, Mylapore, Travancore, Madurai, Vasai and Mumbai, missionaries made their way into the interior as far as Bengal, Agra, Delhi, Lahore and to Tibet. The first of these missionaries were Franciscans, Followed by Jesuits.

St. Francis Xavier arrived in Goa in 1542, and worked also in Cochin, Vasai and Mylapore. Dominicans arrived in India in the mid-16th century, founding establishments in Goa and Cochin, followed by the Augustinians who came from Persia in 1572, also settling in Goa, but also taking up the task of working among the Muslim populations in Bengal.

Evangelization took on a new impetus when the Jesuits began their mission to the Moghul Empire, at the invitation of Akbar. The Jesuits enjoyed limited success in this mission until the reign of Shah Jahan, who reversed the previous stance of religious toleration in the Moghul Empire. Nonetheless, settlements of Catholics were begun in Agra, Delhi, Lahore, Patna, Jaipur and Nawar. The Empire was also the starting point for the famous missions to Tibet. As the power and prestige of the Portuguese settlements in India wanted, the missions in coastal areas suffered. When the Jesuits were suppressed in Portugal (1759), they were also driven out of India. Later in the early 19th century, Portugal suppressed all religious Orders and this too had a dire effect on the Padroado in India.

The foundation of the Congregation of Propaganda Fide on January 6, 1662, by Pope Gregory XV introduced a new epoch in mission history. In an attempt to shore up the strength of the mission territories in India (and also in Asia), noting the weakness of Portugal, the Holy see began to erect Vicariates Apostolic under the jurisdiction of Propaganda Fide. The first of these Vicariates was that of Deccan (erected in 1637 in what is now Mumbai), followed by that of Malabar (erected in 1659, now Verapoly). Sebastiani was consecrated Titular bishop of Hierapolis on December 15, 1969 and sent to Malabar, with the title Vicar Apostolic of Malabar and Administrator of Archbishopric of Cranganore. The new Vicariate eventually established its headquarters in the island of Verapoly. On the 13th March 1709 by a Brief Pope Clement XI Malabar Vicariate was suppressed and Vicariate of Verapoly took its place with Bishop Angelo Francisco as its first Vicar Apostolic.

The Indian Missionary bishops in 1944 formed the Catholic Bishops’ Conference of India (CBCI). The Holy See and the Portuguese Republic signed another concordat on 18th July 1950 terminating Portuguese Padroado in India. According to the concordat, the Portuguese Government renounced the rights and privileges of Patronage and consequently it was relieved of the obligation of endowment in the dioceses of Cochin and Mylapore. The Holy See achieved complete freedom for the erection of dioceses and the appointment of bishops in all parts of India. The diocese of Goa still remains an Archdiocese (without any suffragan) immediately subject to the Holy See, and retains the title “Patriarchate ad honorem” of the East Indies. On January 26, 1951, Pope Pius XII declared the Mother of God patroness of the country, and in the consistory of January, 12, 1953, His Grace Valerian Gracias, Archbishop of Bombay, was created the first Indian Cardinal.

The Decree of the Propaganda Fidei dated 19th September 1953, introduced further changes in the Indian hierarchy, and accordingly, diocese of Cochin became a suffragan under the Archdiocese of Verapoly. After the erection of the Latin hierarchy, one can find the rapid advancement of the Latin Church in India during this period especially in the number of dioceses and bishops. At present, the Latin Church has 129 diocese (23 Archdioceses and 106 dioceses) organized into 20 Provinces.

On November 1964, Pope Paul VI visited India on the occasion of the International Eucharistic Congress, held in Bombay. Pope John Paul II visited India for the first time for 10 days in 1986, and again in November 1999, his 89th Apostolic visit outside Italy, for the occasion of solemnly promulgating in the Post Synodal Apostolic Exhortation “Ecclesia in Asia”, in New Delhi.

Pope John Paul II, by his letter, dated May 28, 1987, to the Bishop of India, determined that the bishops of each of the three Rites have the right to establish their own Episcopal bodies according to their own ecclesiastical legislation. The three ritual bodies are: Conference of Catholic Bishop’ in India(CCBI) for the Latin Rite, Syro-Malabar Bishops’ Synod (SMBS) and Syro-Malankara Bishops’ Synod (SMBS).

The Conference of Catholic Bishops of India (CCBI) is an association of the Bishops of Latin Church in India functioning in accordance with canon 447 of CIC. It was established on April 22, 1988 following the directive of the letter of His Holiness Pope John Paul II to the bishops of India on May 28, 1987. The Latin Bishops of Kerala came up with a historic decision in 2001 to initiate a united effort to realize the Pope’s vision of giving witness to Christ as an individual church.