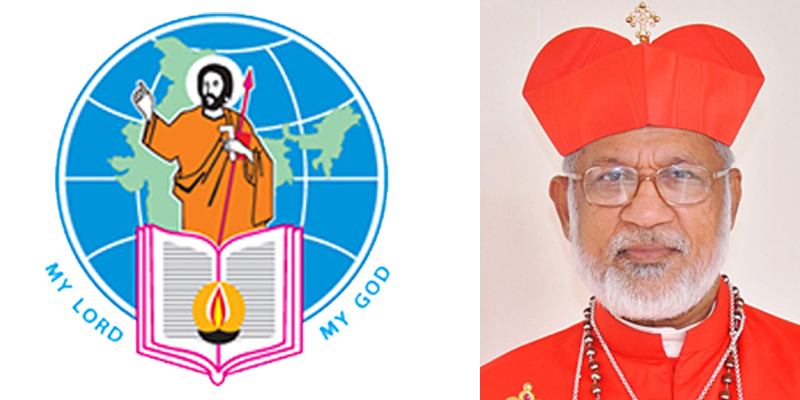 The Syro-Malabar Catholic Church is one of the 22 Eastern (Oriental) Catholic Churches in full communion with Rome. It is the second largest Eastern Catholic Church after the Ukrainian Church and the largest of the Saint Thomas Christian (Nazrani) denominations with 4.6 million believers. It is a sui juris Church governed by the Synod of Bishops headed by the Major Archbishop. The Syro-Malabar Church, with its deep-rooted spirituality and high rate of vocations to priesthood and religious life, can be considered as the most vibrant Catholic community in the world.

The Syro-Malabar Church is an Apostolic Church which traces its origin to the St. Thomas, the Apostle, who landed at Cranganore (Muziris) in 52 AD and founded seven Christian communities in Kerala, at Palayur, Cranganore, Kokkamangalam, Kottakavu (Parur), Quilon, Niranam, and Chayal. St. Thomas was martyred in A.D. 72 at Mylapore, near Chennai/Madras. The early Christian community in India was known as St. Thomas Christians. They were also called Nazranis, meaning those who follow the path of Jesus of Nazareth.

The Arrival of Portuguese and the Influence of the Latin Church

The arrival of the Portuguese in the 16th Century marks a new era in the life of the Thomas Christians. East Syrian Bishops stopped coming. Archdeacon lost his position and Latin Prelates exercised full authority over ecclesiastical administration for almost three centuries. This paved way for the latinization of liturgy and ecclesiastical administration. Following the Coonan Cross oath in 1653 and the introduction of the Padroado (the Portuguese jurisdiction under the Propaganda Congregation) in 1661, the Thomas Christians got divided into two groups, of which the group who resisted Latin rule formed a separate community under the Archdeacon. Later they accepted the West Syrian theological and liturgical tradition of the West Syrian Orthodox Church of Antioch and came to be known as the Jacobite Church. They were further divided into several independent Churches. The group that remained faithful to Rome came to be known as Syro-Malabar Church, a name which became a common epithet only in the nineteenth century. It literally means Syrian Christians of the Malabar Coast (Kerala).

In 1886 the Padroado jurisdiction over the whole Malabar (Kerala) was suppressed and in 1887 Pope Leo XIII re-organized the Syro-Malabar Catholics into two independent Vicariates of Kottayam and Trissur. Finally, the Syro-Malabar Church obtained bishops of their own rites and nationality in 1896, when they were further reorganized into three vicariates of Trissur, Changanacherry and Ernakulam by Pope Leo XIII through his Brief Quae rei Sacrae. Later, the Syro-Malabar Hierarchy was established on December 21, 1923, by the Apostolic Constitution Romani Pontifices of Pope Pius XI (Acta Apostolicae Sedis, 16 [1924], pp. 257-262), with Ernakulam as the Metropolitan See and Trichur, Changanacherry and Kottayam (established in 1911 for the Southists) as suffragans. In 1956 Changanacherry was raised to the status of a Metropolitan See, with Pala as a suffragan diocese.

The restoration of the hierarchy initiated a process of liturgical reform that sought to restore the oriental identity of the Latinized Syro-Malabar rite, which was approved by Pius XII in 1957 and introduced in 1962. In subsequent years several new dioceses were established both within and outside Kerala. From 1962, the Church began to set up mission centers in Northern India, which later became dioceses. Last 40 years have been a period of steady growth for the Syro-Malabar Church.

On December 16, 1992, Pope John Paul II, by the Apostolic Constitution Quae maiori (Acta Apostolicae Sedis, 85[1993], pp. 398-399), raised the Syro-Malabar Church to the status of Major Archiepiscopal sui iuris Church with the title of Ernakulam-Angamaly. Mar Antony Paidyara, the then Metropolitan of Ernakulam was appointed its First Major Archbishop with Mar Abraham Kattumana as the Pontifical Delegate who discharged the duties of the Major Archbishop. Archbishop Kattumana died unexpectedly during his visit to Rome in April 1995 and Mar Padiyara was given the powers of the Major Archbishop. In November 1996 Cardinal Padiyara resigned from his office as Major Archbishop. In his place Archbishop Varkey Vithayathil, C.Ss.R. was appointed as the Apostolic Administrator. In December 1998 he was appointed Major Archbishop by the Pope. In February 2001 Archbishop Vithayathil was created a Cardinal by Pope John Paul II. In 2004, the Holy See granted full administrative powers to the Syro-Malabar Church, including the power to elect bishops.

Today the Syro-Malabar Church is the second largest Eastern Church in Catholic communion and constitutes the largest group of St. Thomas Christians. The other two Catholic Churches in India are the Latin Church and the Syro-Malankara Church.

At present there are five Archdioceses - Ernakulam-Angamaly, Changanacherry, Trichur, Tellicherry and Kottayam and 13 eparchies - Bhadravathi, Belthangady, Irinjalakuda, Kanjirapally, Kothamangalam, Idukki, Mananthavady, Mandya, Palai, Palghat, Ramanathaapuram, Thamarassery, and Thuckalay within the canonical territory of the Major Archiepiscopal Church and 12 eparchies outside, of which Adilabad, Bijnor, Chanda, Gorakhpur, Jagdalpur, Kalyan, Rajkot, Sagar, Satna, and Ujjain in India are with exclusive jurisdiction and Kalyan and Faridabad in India and the St. Thomas Eparchy of Chicago in the United States of America enjoy personal jurisdiction.. There are altogether 4018204 (4 million) Syro-Malabarians within the 30 Syro-Malabar Eparchies and approximately 5,85,900 members live as migrants outside any Syro-Malabar Eparchy. There are 47 Bishops, 8547 priests (3,556 diocesan and 4,991 religious), and 32,114 women religious and 1214 major seminarians. Many Bishops, priests, religious and laity of the Syro-Malabar Church are present all over the world and share in missionary and pastoral life of the sister Churches.