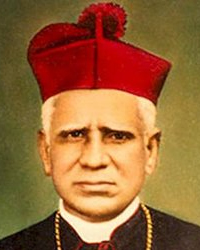 Born on 25 March 1847 at Pulinkunnu, Aloysius was ordained priest on 4 December 1870. On 11 August 1896 he was appointed titular bishop of Tiumand and first Vicar Apostolic of the newly constituted Vicariate of Ernakulam. In the same year, on 25 October, Mar Aloysius was consecrated bishop at the Papal Seminary, Kandy, by the Most Archbishop L. Zalesky, the Delegate Apostolic. On 5 November 1896 he took charge of the newly erected Vicariate of Ernakulam. Although he had to begin from the scratches, his indefatigable labours, coupled with the hearty co-operation of the clergy and laity brought the Vicariate, within a few years, to a position of eminence. He continued to govern the Vicariate ably and successfully till his death on 9 December 1919. His mortal remains were interred in the sanctuary of the Metropolitan Church, Ernakulam and transferred to the sanctuary of the new Basilica in March 1974.