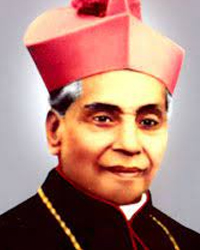 Mar Aloysius Pazheparambil was succeeded as Vicar Apostolic by the late Most Dr. Augustine Kandathil. Born on 25 August 1874 at Chempu, he was ordained priest at the Papal Seminary, Kandy on 21 December 1901. On 29 August 1911, he was appointed titular bishop of Arad and co-adjuctor of Mar Aloysius, with the right of succession and was consecrated on 3 December. On 18 December 1919 he took charge of the Vicariate. On 21 December 1923, he was nominated Archbishop of Ernakulam, when the Syro-Malabar Hierarchy was established by the Apostolic Bull "Romani Pontifices" of Pius XI. His grace received the Pallium on 16 November 1924 at the Cathedral, Ernakulam from His Excellency the late Mgr. Lepicier who had been sent to INDIA as Visitor Apostolic. Archbishop Kandathil made his "Ad limina" visit in the Jubilee Year of 1925. In 1926 the Silver jubilee of his Sacerdotal Ordination and in 1936 that of his Episcopal Consecration were celebrated with great solemnity. Archbishop Kandathil, not only followed the holy and progressive footprints of his illustrious predecessor, but also opened new avenues of apostolate in keeping with the changing times. As a token of special consideration and appreciation the Holy Father conferred upon him the titles of "Assistant at the Pontifical Throne", "Domestic Prelate" and "Roman Count". In 1951 his Sacerdotal Golden Jubilee was celebrated with befitting solemnity.

The illustrious prelate passed away to his eternal reward on 10 January 1956, after having received the last rites from the hands of his auxiliary Rt Dr. Joseph Parecattil. On 12 January his mortal remains were interred in the sanctuary of the Metropolitan Church and thence transferred to the sanctuary of the new Basilica in March 1974.