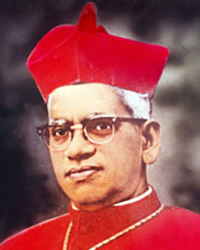 Mar Joseph Parecattil was born at Kidangoor on 1 April 1912. He did his ecclesiastical studies in the Papal Seminary, Kandy, where he took a licentiate in Philosophy and doctorate in Theology with distinction. He was ordained priest on 24 August 1939. He served as assistant parish priest at Narakkal and N. Parur and as Parish Priest at Chunangamvely. Thereafter he served as the editor of "Sathyadeepam", until he was nominated titular bishop of Arathusa and Bishop Auxiliary to His grace, Most Mar Augustine Kandathil, on 28 October 1953. He was consecrated bishop by His Eminence Eugene Cardinal Tisserent at the Cathedral on 30 November 1953. On the demise of Mar Augustine Kandathil on 10 January 1956, bishop Parecattil was elected Administrator. He was appointed Administrator Apostolic on 27 January 1956 and nominated archbishop on 20 July 1956. His Grace took charge of the archdiocese on 9 January 1957.

He was Appointed Consultor to the Sacred Oriental Congregation in 1961. During the fourth session of the Vatican Council II archbishop Parecattil was appointed member of the International Episcopal Synod. On 20 October 1966 he was elected Vice-Chairman of the Catholic Bishops' Conference of INDIA. On the occasion of the visit of H.E. Maxmilian Cardinal Fürstenberg on 27 February 1968, he was declared Member of the Sacred Oriental Congregation. H.H. Pope Paul VI made him Cardinal in 1969. He was nominated member of the Secretariat for Christian Unity in 1976; was elected Chairman of C.B.C.I. in 1972; was appointed President of the Commission for the Revision of the Code of Oriental Canon Law in 1972; was made Member of the Commission for the Revision of the Code of Latin Canon Law in 1972 and was re-elected President of C.B.C.I. at its Calcutta session 1974. He was appointed member of the Secretariat for Non-Christians in 1974. He was for many years President of the Syro-Malabar Bishop's Conference, in which capacity he was also the Chancellor of the Dharmaram Pontifical Institute for Philosophy and Theology, Bangalore and of the Oriental Institute of Philosophy and Theology, Kottayam. He was the President of the Kerala Catholic Bishops' Council for over six years in which capacity he was also Chancellor of the Pontifical Institute of Philosophy and Theology, Alwaye. He retired from office on 1 April 1984. His Eminence had the singular privilege of participating in the two conclaves which elected Pope John Paul I and John Paul II. His Eminence passed away on 20 February 1987. His mortal remains were interred in the sanctuary of the St. Mary's Cathedral Basilica on 22 February 1987.