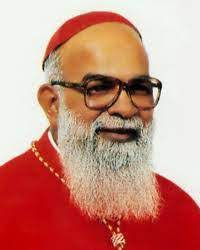 Antony Cardinal Padiyara was born at Manimala on 11 February 1921. After completing his ecclesiastical studies in St Peter's Seminary, Bangalore and Salem, he was ordained priest on 19 December 1945 for the diocese of Mysore. He served as assistant at Kodivery and as Parish Priest at Kollegal and Ooty. In 1952 he was made Rector of the Minor Seminary, Mysore and in 1954 was appointed Professor at St Peter's Pontifical Seminary, Bangalore.

On 3 July 1955 he was nominated bishop of the newly formed diocese of Ootacamand. On 25 September 1955, he assumed charge of the diocese. He was consecrated bishop on 16 October 1955.

He was promoted archbishop and transferred to the Metropolitan See of Changanacherry, of which he took charge on 15 August 1970. He received the Pallium on 7 August 1970. In 1976 he was elected Vice President of the Catholic Bishops' Conference of INDIA and in 1983 President of the Kerala Catholic Bishops' Council. In 1984 he was elected President of the Syro-Malabar Bishops' Conference. Consequently he was also the Chancellor of the Paurasthya Vidyapitham, Kottayam, and the Dharmaram Pontifical Institute for Philosophy and Theology, Bangalore. On 8 September 1978 His Holiness Pope John Paul I appointed him Apostolic Visitator to the Syro-Malabar Catholics living outside Kerala. The Holy Father Pope John Paul II transferred Mar Padiyara to the Metropolitan See of Ernakulam on 18 May 1985. He took charge on 3 July 1985.

His Holiness Pope John Paul II nominated Mar Padiyara a member of the College of Cardinals on 29 May 1988. At the Consistory on 28 June 1988 he was raised to the dignity of a Cardinal. On 20 October 1988 His Holiness appointed Cardinal Padiyara a member of the Congregation for the Oriental Churches and of the Pontifical Commission for the Revision of the Code of Oriental Canon Law. As a crown to his glory, he has been appointed the first Major Archbishop of Syro-Malabar Church on 16 December 1992. The Holy Father Pope John Paul II accepted the resignation of His Em. Card. Padiyara on 18th December 1996. He spent his retired life at Cardinal Padiyara Nature Cure Centre, Kakkanad. His Eminence passed away on 23rd March 2000 and his mortal remains were interred in the sanctuary of the St. Mary’s Cathedral Basilica on 25th March 2000.