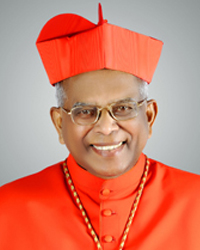 Born on 29th May 1927 of Thresiamma and Justice Joseph Vithayathil at North Parur, Archbishop Varkey Vithayathil had his school education at North Parur and Thiruvananthapuram, and his college education at University College Thriuvananthapuram and St Joseph's College, Trichy. Joining the Redemptorist Order, Varkey Vithayathil professed as its member on 2nd August 1947, and after completing his studies in Philosophy and Theology he was ordained Priest on 12th June 1954. In 1955 he went to Rome for his studies in Canon Law at the University of St Thomas Aquinas (Angelicum) from where he took his doctorate in 1959 on "The Origin and Progress of the Syro-Malabar Hierarchy."

After coming back from Rome, Dr. Varkey Vithayathil served as professor of Canon Law for about 25 years at the Redemptorist Major Seminary, Bangalore. In 1972 he took his Master's Degree in Philosophy from Karnataka University. He also taught different subjects in several other Seminaries in Bangalore. He served as the Provincial Superior of the Redemptorist Order from 1978 to '84, and as president of the CRI from 1984 to '85. He was appointed Apostolic Administrator of the Benedictine Monastery in Bangalore (1990-96) by His Holiness Pope John Paul II.

His Holiness Pope John Paul II nominated Mar Varkey Vithayathil a member of the college of cardinals on 21st January 2001. At the consistory on 21st February he was raised to the dignity of a cardinal. The sacerdotal golden jubilee of the Major Archbishop Mar Varkey Cardinal Vithayathil was celebrated under the auspices of the Syro-Malabar church on 8th November 2003. The jubilee was inaugurated on 12th June 2003 and was concluded on 12th June 2004.