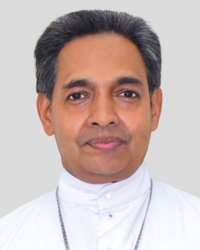 Mar Ephrem was born on 10th December 1960 at Nayarambalam in the Archeparchy of Ernakulam-Angamaly to late Thomas and late Thresia, Nariculam. Having completed his school education at St. George’s School Vadel and Bhagavathivilasam School, Nayarambalam, Fr. Ephrem joined the Minor Seminary of the Archeparchy of Ernakulam-Angamaly. He had his Philosophy Course in Sacred Heart Seminary, Poonamallee and Theology in St. Joseph’s Seminary, Mangalore.

On 27th December 1986 Mar Antony Cardinal Padiyaraordained him priest at St. Joseph’s Church, Sanjopuram, for the Archdiocese of Ernakulam.Fr. Ephrem served the archdiocese as Assistant Vicar at St. Mary’s Forane Church, Kanjoor (1987), St. Mary’s Forane Church, Koratty (1988), St. Mary’s Cathedral Basilica, Ernakulam (1989) and then as Vicar at St. Joseph’s Church, Madakkal (1990-1992). Later he continued his higher studies at Vidyajyoti College of Theology, Delhi from where he obtained his Master’s Degree in Theology.

While Fr. Ephrem was pursuing his higher studies at Vidyajyoti College of Theology, Delhi he served also as Chaplain of Migrant Syro-Malabar Catholics in New Delhi (1992-1995). After the completion of studies at Delhi Fr. Ephrem was appointed Rector of Saint VianneyGurukul, Minor Seminary of the diocese of Chanda (1995-2002) and in that capacity he served the diocese of Chanda for seven years. He obtained a Doctorate in Spiritual Theology from St. Peter’s Pontifical Institute of Theology and Philosophy, Bangalore (2002-2004). After having returned to the home diocese, he served as Vicar at Holy Family Church, Thabore (2004-2007). Then he served as professor of Systematic Theology and member of Formation Council at St. Augustine’s Faculty of Theology,Toronto, Canada.