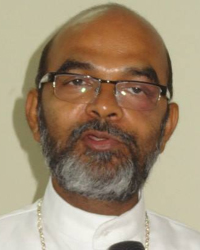 Mar Varghese Thottamkara was born on 23rd May 1960 at Thottuva, Ernakulam District, to late Souru and Mariam Thottamkara. After finishing the Matriculation studies at G. V. H. School, Koovapady, he joined the minor seminary of the Congregation of the Mission (CM) in Gopalpur in July 1976. He was ordained priest on 6th January 1987 at his home parish, St. Joseph’s Church, Thottuva by Cardinal Antony Padiyara

In 1987 he served as Assistant Pastor at Muniguda and from 1988-1990 as Assistant Pastor and hostel warden at Christnagar (Allada). In 1990 he was sent to Ethiopia to teach in the Minor Seminary of the Vincentians of Ethiopia at Ambo. In 1992 he taught in the Major Seminary at Addis Ababa as a visiting Professor. In 1993 he was transferred to Addis Ababa as the first Rector of St. Paul’s Major Seminary of the Apostolic Vicariate of Nekemte. He also served as the Judicial Vicar of the Vicariates of Southern Ethiopia. He holds a Licentiate in Moral Theology. In 1997 was appointed Rector of the Vincentian Major Seminary at Addis Ababa.

On 28th of June 2013 Holy Father nominated Fr.Varghese Thottamkara Coadjutor Bishop of the Apostolic Vicariate of Nekemte in Ethiopia (East Africa); he was ordained bishop on 13th August 2013 and succeeded as the Vicar Apostolic on 10th November, 2013.