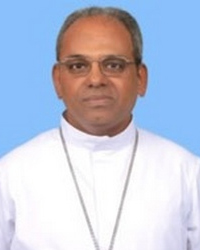 Mar Jose Chittooparambil CMI was born on 10th December 1954 to late Mr. C. V. Cherian and Mrs. Mariam Cherian at Neeleeswaram of the archdiocese of Ernakulam-Angamaly. After passing the 9th std., he joined the Sacred Heart Province, Kalamassery of CMI Congregation in 1971 and passed SSLC from Infant Jesus High School, Vazhakulam in 1972. He completed Pre-degree from St. Paul’s College, Kalamassery. He did his Graduation in Philosophy and Theology at Dharmaram College, Bangalore. He had his post-graduation in Social Work (MSW).

Bishop Jose did his Novitiate at Karukutty and made his First Religious Profession on 5th June 1977. He opted for working in Gujarat Mission just after his Philosophical studies and became the member of St. Xavier’s Region, Rajkot. He was ordained a priest on 8th May 1985 by Mar Gregory Karotemprel CMI. He started the mission centre at Nanikatechi in Surendranagar Dist., Gujarat and served as administrator of Poornodaya Training Centre, Bhopal and Diocesan Director of Social Work.

In 2008 he was elected the Provincial Superior of CMI St. Xavier’s Province, Rajkot. While being the Provincial he was appointed the Bishop of Rajkot on July 16, 2010 and ordained Bishop on September 11, 2010.