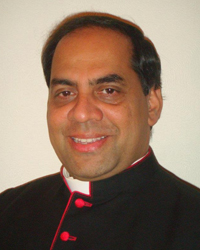 Archbishop Mar Kuriakose Bharanikulangara was born on 1st February, 1959 as the fourth son of Alia and Antony Bharanikulangara at Karippassery. He completed his primary and high school studies at Vattaparambu, Moozhikkulam and  Puliyanam.

He joined the S.H. Minor Seminary, Trikkakara in 1973. He completed his Philosophical studies at St. Joseph’s, Seminary Carmelgiri (1976-’79) and Theological studies at St. Joseph’s Seminary, Mangalapuzha (1979-’83). He was ordained priest on 18th  December, 1983 by Mar Sebastian Mankuzhikkary. He served the Archdiocese as Assistant parish priest at Tripunithura (1983-’88); as Acting Parish Priest at Thiruvankulam and at  Vimalagiri (1988).

He had his Diplomatic Training from the Pontifical Ecclesiastical Academy, Rome. His services were in Diplomatic services of the Holy See in Thailand (1995), Cameroon (1996), Iraq (1999), Venezuela (2001), Congo, Gabon (2004), U.N. Headquarters in New York (2008) and Germany. After 18 years of commendable work in various Vatican nunciatures Monsignor Kuriakose Bharanikulangara was nominated the first bishop of the newly erected Diocese of Faridabad on 6th March 2012. His Episcopal Ordination was on 26th May, 2012 at Delhi and installation was on 27th May, 2012 at Faridabad.