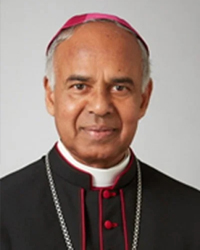 Archbishop Joseph Chennoth was born as the seventh child of Joseph and Mariam on 13th October 1943 at Kokkamangalam. His family belongs to the Parish St Thomas Church Kokkamangalam one of the seven churches founded by St Thomas, the Apostle.

Joseph did his preliminary studies in St Antony’s Primary School and Govt. Boys School Cherthala. Later he joined S.H. Minor Seminary of the archdiocese of Ernakulam. He began his philosophical studies at St Joseph Pontifical Seminary, Aluva in 1962. After a year in 1963 he was sent to Rome to continue his Philosophical and Theological studies in Urban University. He was ordained priest on May 4, 1969 in Austria.

Fr. Joseph Chennoth returned to Kerala in 1969 and served the Archdiocese of Ernakulam as assistant parish priest in the parishes of Koratty, Kottamam, and Basilica respectively. He obtained Masters degree in Arts from Baroda University and had been secretary to late Cardinal Joseph Parecattil for a short period. Fr. Joseph earned a Doctorate in Canon Law from the Urban University and joined the diplomatic service of the Holy See in 1973. He served in the Nunciatures of Turkey, Iran, and Cameroon. He was appointed secretary to states of Africa and was given a special privilege of ‘Prelate of Honor’ by Holy See in honour of his service to the Church in Belgium, Listburg and Spain. He also worked as a councillor to the Nunciatures of Andaman, Norway, and Sweden. He was given a special assignment in the Nunciature of Taiwan in 1997. Msgr Joseph Chennoth was nominated as titular Archbishop of the Milevi in 1999 and was consecrated by His Holiness John Paul II on 30th October 1999 at St Peters Basilica Rome. His Grace worked as Nuncio to Japan and during his office he died on 8th Sept. 2020 at Tokyo, Japan and was buried at Kokkamangalam his native parish.