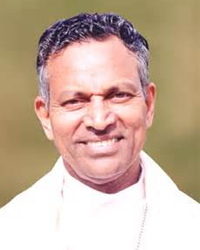 Bishop Gratian was born at Alangad, Ernakulam, on 15 September 1933. He took his Honours Degree in Mathematics from the University of Madras. He made his religious profession in the Congregation of Mary Immaculate in 1958. He underwent priestly training at Dharmaram, Bangalore and was ordained Priest in 1964. He was for a long time the Director of the Kerala Catholic Students' League. When the Exarchate of Bijnor was formed in 1972, he was nominated its first Exarch, and was consecrated bishop by His Emce. Joseph Cardinal Parecattil at Rajagiri, Kalamasery on 6 November 1977