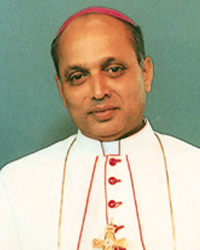 Archbishop Abraham Kattumana was born on 21 January 1944, at Thottakam near Vaikom. After S.S.L.C. he joined the S.H. Minor Seminary of the Archdiocese on 13 June 1960. He began his philosophical studies in St. Joseph's Pontifical Seminary, Carmelgiri. After three months he was sent to Rome. From 1962 to 1969 he studied in the Pontifical Urban University of 'Propaganda de Fide' and took Masters Degree in Philosophy and Theology. He was ordained priest in ‘Propaganda de Fide’ College, Rome on 3 May 1969 by His Eminence Joseph Cardinal Parecattil. Later he joined the Pontifical Ecclesiastical Academy. He obtained doctorate in canon law and finished the studies in the academy in 1973 and entered the Diplomatic Service of the Holy See on 15 April 1973. He served in the Nunciatures in Indonesia, Uruguay, Iraq, Newzeeland and Great Britain. He was appointed counsellor of the Nunciature in 1986. He was nominated Apostolic Pronuncio to Ghana, Benin and Togo on 8 May 1991 and was consecrated Archbishop by His Eminence Antony Cardinal Padiyara on 3 August 1991 in St. Mary's Basilica, Ernakulam. He is the first Apostolic Pronuncio from Syro-Malabar Church. He was appointed Pontifical Delegate to the Major Archiepiscopal Church of Ernakulam- Angamaly on 16 December 1992. He convened the Synod, finalized its statutes, codified the particular laws and established other canonical structures. While on a visit to Rome he died due to cardiac arrest on 4 April 1995. His body was brought to Ernakulam and buried in the Cathedral Basilica on 7 April 1995