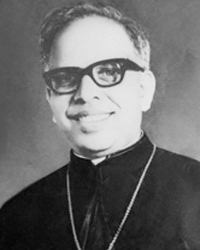 Bishop Januarius was born at Konthuruthy, Ernakulam on 20 March 1913. He joined the Congregation of Mary Immaculate (CMI) in 1934 and did his priestly studies at St Joseph's Seminary, Mangalore. He was ordained priest in 1942. He graduated at S.H. College, Thevara, took Ph.D. from Rome, taught Philosophy at Chethipuzha and Dharmaram until the Chanda Mission was formed in 1962. He was nominated its first Exarch in 1968. On 3 May 1977 he was consecrated bishop for the diocese of Chanda. He died on 28 March 1995 and was buried at Chanda.