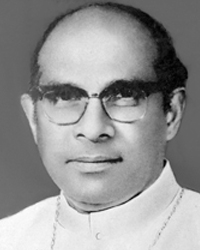 Bishop Jonas was born on 21 December 1919 at Puthenpally. He had his primary education at Ernakulam and Thiruvanandapuram. He made his religious profession in the Congregation of Mary Immaculate in 1937; and completed his ecclesiastical studies in Kandy and Pune. It was he who founded and designed the present Dharmaram Pontifical Institute, Bangalore where he taught until the Catholic Bishops' Conference of INDIA appointed him its Assistant (later Deputy) Secretary General. The Holy See nominated him the first bishop of the newly created diocese of Rajkot in the State of Gujarat. He was consecrated bishop by His Eminence Joseph Cardinal Parecattil at Mannanam on 11 May 1977. He passed away to his eternal reward on 7 November 1981 and was buried in the Rajkot Cathedral Church.