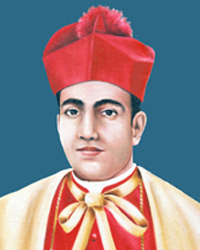 Archbishop Joseph Kariattil was born at Mangadu (Alangad) on 5 May 1742. The professors of the Seminary at Alangad sent Joseph Kariattil to the Propaganda College, Rome, on 7 April 1755 when he was only 13 years old. He was ordained priest on 25 February 1766. Having taken Doctorate in Philosophy and Theology he returned to his native place on 2 August 1766.

On his return, he was appointed professor of the Seminary at Alangad. He took keen interest in the reunion of the schismatics who got separated from the Catholic Church after the Coonen Cross oath at Mattanchery. At the request of the schismatic archbishop Thoma VI (Divannasios I), who had a following of over 30,000 dissidents, Mar Kariattil made the historic journey to Rome on 4 May 1778 together with Paremmakal Thoma Kathanar.

After many years of arduous toils in Rome and Portugal, Dr Kariattil succeeded in convincing the authorities of the real needs of the Malabar Church. He was consecrated bishop at Lisbon on 17 February 1783 and was appointed Archbishop of Cranganore. On his way back to his own flock, he unfortunately met with an unexpected death at Goa on 10 September 1786. He was given a royal burial there. His mortal remains were transferred to Alangad on 11 April 1961. The Second Centenary of his death was celebrated at Alangad on 9 September 1986.