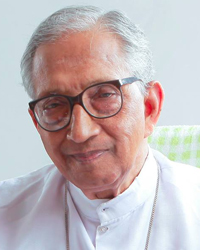 Born on August 14, 1930 P.J. Joseph had his primary education in Holy Family L.P. School and St. Peter’s U.P. School, Kurumpanadom and high school education in St. Berchman’s High School Changanacherry. He had his higher studies in S.B. College Changanacherry and Loyola College, Madras, from where he took his M.A degree in Economics.

He did his seminary studies in St. Thomas Minor seminary, Parel and Papal Seminary Pune. After Ordination on 3rd October 1962 at Pune he was appointed lecturer in Economics and Warden of St. Joseph’s Hostel, St. Berchmans’ College, Changanacherry. He was on the campus ministry for one decade (1962-1972). In 1969, he had the advantage of taking a one year course in Developmental Economics at the prestigious Oxford University.

He took keen interest also in the study of the ancient patrimony of the Syro-Malabar Church and for its restoration in accordance with the directives of Vatican II, as a member of the Central Liturgical Committee of the Church. He was actively involved in the various apostolates of the Archeparchy and was secretary of the Pastoral Council for a short period.

On January 29, 1972 he was nominated Auxiliary Bishop of Changanacherry and was ordained bishop by Pope Paul VI on Feb.13, 1972 in Rome. During the five years of his service as Auxiliary Bishop and Vicar General (ex officio) introduced many reforms in the Archdiocese in close collaboration with Archbishop Mar Antony Padiyara.

Realizing the importance of youth apostolate he took the initiative in establishing a Diocesan Youth Movement called ‘Yuvadeepti’. In course of time it spread to all the Dioceses in Kerala leading to the formation of Kerala Catholic Youth Movement (KCYM). He was at the forefront in the struggle for educational freedom. He helped the Archbishop in establishing several institutions for the under privileged such as homes for the the mentally retarded and the physically handicapped.

During the next 9 years he was entrusted with the task of nurturing the new born diocese of Kanjirappally to which he was appointed bishop on February 26,1977 and assumed charge on May 12, 1977.

Bishop Powathil was appointed Archbishop of Changanacherry on November 05, 1985 and he assumed charge on January 17 the next year. True to his motto, the ministry of Mar Joseph Powathil as bishop and Archbishop has been one of dedication and commitment to ‘Truth and Charity’.  Mar Powathil’s ministry transcends the bounds of the Archdiocese and the people entrusted to his care. He served as President of CBCI (1994-98), Chairman of KCBC (1993-’96) & Chairman of Education Commission of C.B.C.I. He was a member of the Post Synodal Commission for Asia (1998) and founder Chairman of Inter Church Council.

The Syro-Malabar Church, in which he was born and brought up, has always been kept close to his heart. He has always been a devoted son of this Church, and therefore always on the forefront in the struggles for the restoration of its legitimate rights and its identity as an Individual Church.

He did a great deal to promote formation based on this identity to priests, religious and the laity (Oriental Study Forum, Dukrana, Christian Orient, Missionary Orientation Centre (MOC), Amala Theological College, Marthoma Vidyanikethan, Zion Retreat House etc.. He also founded an Eastern Monastic Congregation - Sisters of St. Thomas (SST). The new Priests’ Home stands out as a symbol of his care and concern for the elderly and sick priests.

Archbishop Mar Powathil has been a staunch defender of the teachings of the Magisterium. His concern for the poor, the underprivileged and the marginalized was such that he initiated a number of schemes for their development. The Malanad Development Society in Kanjirappally diocese and the various projects of the Changanacherry Social Service Society (CHASS) bear ample testimony to this. Worthy of special mentions are the foundation of Bl. Alphonsa Sneha Nivas for street children and Bl. Alphonsa Centre for the terminally ill.

Mar Powathil’s pastoral outlook is broad and encompasses the non-Catholics and even the non-Christians. He is well-known in the ecumenical movement (interchurch Council, Nilackal Ecumenical Trust) and the Church’s fellowship with followers of the other religions. New centres or parishes have been established in the extended territory (home mission) namely, at Chengannoor, Mavelikkara, Adoor, Kollam, Niranam, Pathanapuram, Kottarakkara, Karavaloor. The source of Mar Joseph Powathil’s sense of mission and dedication is undoubtedly his commitment to Truth and Charity, enriched by his solid faith and life in the Spirit.