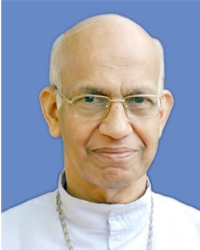 Mar George Punnakottil was born on 13th September 1936 at Thazhavankunnu. After matriculation in 1953 from Infant Jesus High School, Vazhakulam he joined the Minor Seminary at Ernakulam. He did his philosophical studies at St.Joseph's Pontifical Seminary, Mangalapuzha and theological studies at the Pontifical Urban University,Rome.

He was ordained a presbyter in Rome on 18th October1961 through the imposition of hands by Mar Matthew Kavukatt, the then Metropolitan of the archdiocese of Changanacherry.He took licentiate in the study of Sacred Scripture from the Pontifical Biblical Institute in Rome, and doctorate in Biblical theology from the Pontifical Gregorian University, Rome.

His first appointment in the Eparchy was as the Assistant Parish Priest of St.George's Cathedral, Kothamangalam. In 1968 he joined the staff of the St.Thomas' Apostolic Seminary, Vadavathoor where he served mertoriously as  the professor of Sacred Scripture and Theology.

In 1974 he left for the United States of America on sabbatical year to further pursue his studies. He obtained a master's degree in International relations from the Vanderbilt University of Nashville, Tennesse State in 1976. He was a visiting scholar in the Union Theological Seminary in 1976.

Coming back to India in 1976 he resumed his office as professor at St.Thomas' Apostolic Seminary, Vadavathoor. He also served the Seminary  as its Vice Rector and Editor of the periodical "Bible Bhaashyam". He has written a number of scholarly articles in periodicals and two books on the Bible. On 26th February 1977 he was appointed the Bishop of the diocese of Kothamangalam. His Episcopal Ordination was on 24th April 1977.

-          Chairman of the CBCI Commission for Ecumenism and Dialogue.

-          Member of the Pontifical Council for the Cultural Treasures of the Church, Rome.