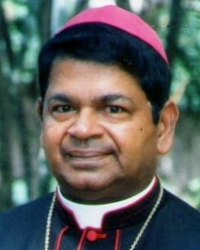 Archbishop Dr. George Panikulam was born at Puthenchira on 26th October 1943. After school education he joined St Mary’s Minor Seminary at Thope, Thrissur. His major seminary formation was at St Joseph’s Pontifical Seminary, Aluva. His priestly ordination was on 11th March, 1967. After one year service at Lourdes Cathedral, Thrissur as Assistant vicar, he was sent to Rome for higher studies. He secured Doctorate in Sacred Scripture and Licentiate in Canon Law and Sacred Theology. Later he joined the diplomatic service of Vatican. While he was serving as the Vatican Observer in U.N.O., he was nominated the Titular Archbishop of Arpaia in Rome and the Apostolic Nuncio of Honduras in Central America on 4th December 1999 and he was ordained Archbishop in Rome by His Holiness Pope John Paul II on 6th January 2000. From 2003, he is serving as the Apostolic Nuncio of Mozambiquezin Africa.