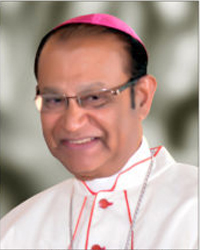 He was born on 11th April 1940 at Puthenvelikkara. After school studies, he joined the Minor Seminary of the diocese of Mysore. After the bifurcation he opted for the diocese of Chickamangalore. He was ordained priest in the year 1964. He started pastoral ministry at the Cathedral Church of Chickamangalore, Later he served at St Joseph’s High School Chickamangalore, St Lawrence Church, Mallathur etc. He had higher studies in Rome and took doctorate in Moral Theology. He was Professor of Theology and Kannada. Literature in St Peter’s Pontifical Institute, Bangalore its president from 1984 to 1990 and Rector from 1997 to 2003. He was consecrated the Bishop of Mysore on March 25th 2003 and took charge on the same day. He is the nephew of Mar Francis Vazhappilly, the late Bishop of Thrissur.