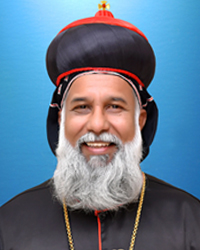 Baselios Cleemis was born on 15 June 1959 as Isaac Thottumkal (alternatively spelled as Thottunkal) in Mukkoor, a small village close to Mallappally Town in Pathanamthitta district in the State of Kerala in South India. His parents are Mathew and Annamma Thottumkal. The Thottumkal family is a part of the Pakalomattom family, which is an ancient Syrian Christian family in Kerala.[6] Education[edit] He attended the Minor Seminary Formation in Tiruvalla from 1976 to 1979. He received a B.Phil. degree from St. Josephs Pontifical Institute, Mangalapuzha, Aluva, where he attended from 1979 to 1982. He received a B.Th. degree from the Papal Seminary, Pune where he attended from 1983 to 1986. Thottunkal was ordained a priest on 11 June 1986. He studied for the Master of Theology in Dharmaram College, Bangalore where he attended from 1986 to 1989. Thottunkal took his Doctorate in Ecumenical Theology from Pontifical University of St. Thomas Aquinas (Angelicum), Rome in 1997.[7] Episcopal career[edit] On his return from Rome he became the Vicar General (Proto Syncellus) of the Eparchy of Bathery. Pope John Paul II nominated Aboon Isaac Cleemis as Apostolic Visitor and the Auxiliary Bishop of Trivandrum on 18 June 2001 for the Syro-Malankarites residing in North America and Europe. He was consecrated on 15 August 2001 at Tirumoolapuram, Tiruvalla, assuming the name Isaac Mar Cleemis. The Holy See appointed Cleemis as sixth Bishop of the Eparchy of Tiruvalla on 11 September 2003. Cleemis was installed as the first Metropolitan Archbishop of the Archieparchy of Tiruvalla on 10 June 2006. Cleemis was unanimously elected as the Major Archbishop of the Syro-Malankara Catholic Church through the first Holy Episcopal Synod of election of the Syro-Malankara Catholic Church convoked on 7â€“10 February 2007 at Catholicate Centre, Pattom, Trivandrum. Pope Benedict XVI approved the election on 9 February and it was announced on 10 February at St. Marys Cathedral, Pattom, Trivandrum. He assumed the name Baselios Cleemis; Cleemis was enthroned the Second Major Archbishop of the Syro-Malankara Catholic Church on 5 March 2007 at St. Marys Cathedral, Pattom, Trivandrum. Cardinal Telesphore Toppo and Cardinal Mar Varkey Vithayathil participated in the installation ceremony. Cleemis was elevated to the College of Cardinals of the Catholic Church by Pope Benedict XVI at the Papal Basilica of Saint Peter in the Vatican on 24 November 2012.[4] As Cardinal-Priest he was assigned the titular church of San Gregorio VII. He is the first bishop of the Syro-Malankara Church and the fifth Keralite becoming Cardinal. He said it was a sign of the Popes appreciation of Indian Catholics "unity in diversity", and cited the witness, the defense of human life, and the example of authentic prayer given by Blessed Mother Teresa of Kolkata.[8] On Thursday, 31 January 2013, Cleemis was appointed by Pope Benedict XVI to serve as a Member of the Congregation for the Oriental Churches and the Pontifical Council for Interreligious Dialogue. Cleemis participated as a cardinal-elector in the conclave that elected Pope Francis.[1][2][3] Because he was the first bishop from the Syro-Malankara Church to be made cardinal, Cleemis also was the first cardinal from the Syro-Malankara Church ever to participate as a cardinal-elector in a papal conclave.[9] During the conclave Cleemis was one of the four cardinal-electors from outside the Latin Church who wore different vestments, proper to their respective churches. The others were Coptic Catholic Patriarch-Emeritus Antonios Naguib, Maronite Patriarch Bechara Boutros al-Rahi, and Syro-Malabar Major Archbishop George Alencherry.[5]