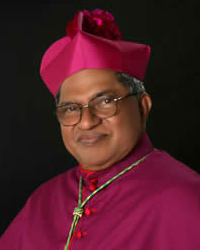 Most Rev.Dr. Francis Kallarakal, M.A., S.T.L., the Bishop of Kottapuram was nominated Archbishop of Verapoly on February 20, 2010 and was installed Metropolitan Archbishop of Verapoly with canonical solemnities and rituals officiated by His Eminence Telesphore Placidus Cardinal Toppo, Archbishop of Ranchi on Sunday April 11, 2010. He received Pallium on June 29, Tuesday 2010 at St. Peter’s Basilica, Rome.

It is Archbishop Francis Kallarakal who made the historical declaration erecting St. Philomina’s Church Koonammavu as St. Chavara Kuriakose Pilgrim Centre in the context of the canonization of the Blessed Chavara Kuriakose who was the Vicar General of this Archdiocese and who spent the last seven years (1864-1871) of his life at Koonammavu being the Prior of six Monasteries of Verapoly Vicariat.  The Archbishop was one of the principal concelebrants for the canonization ceremony held on 23rd November 2014 at Vatican, Rome.

The Archdiocesan Synod, celebrated from 8th to 12th April 2015, after 118 years, was a historical milestone in his tenure.