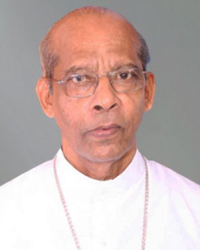 Bishop Thomas Chakiath was born of Chackappan and Mariam Chakiath on September 10, 1937 at Moonnamparambu, Karukutty, in Ernakulam District. After his school education at St. Mary's L.P.S. Karukutty, S.H. Orphanage U.P.S. Mookkannoor, and Mar Augustine Memorial H.S. Koratty, Young Thomas Chakiath had his seminary formation for two years in the Sacred Heart Petit Seminary, Ernakulam and for seven years in the Pontifical Seminary, Alwaye, and was ordained priest on November 30, 1964 by Joseph Cardinal Parecattil at the Eucharistic Congress in Bombay. Fr. Thomas Chakiath served as assistant vicar of St Thomas Church, Malayattoor and of St. Mary's Cathedral Basilica, Ernakulam where he was also the Managing Director and the First Principal of Amulia Industrial Training Centre (I.T.C.)

From 1968 to '72 Fr. Thomas Chakiath had his higher education at St Thomas Acquinas University, Angelicum, Rome, from which he took his doctorate in sociology. He specialised further in the same subject later in 1981-'82 when he attended a course on Community Development and secured a Diploma from the Coady International Institute in Canada. After coming back from Rome, Dr. Thomas Chakiath served as the vicar of St Antony's Church, Chengamanad for nearly two years. From 1974 Dr. Thomas Chakiath had been Professor of Sociology for 23 years at the Pontifical Institute of Phiolosophy and Theology, Alwaye, where he was Vice Rector for a term and also Spiritual Father. Besides his Doctoral Thesis entitled "Value Clarification and Conscientization - The Role of the Church in Socio-Economic Development", he has also authored the book "The social vision of the Church". He was the chief editor of "Mathavum Chinthayum" for eight years, and was also the editor of "St Thomas Academy for Research (STAR) Documentation." Besides English and Latin, he knows German, Italian and Syriac.

On 17th February 1998 Dr. Chakiath was nominated the Titular Bishop of Uzippari and the Bishop Auxiliary of Ernakulam - Angamaly and he was consecrated Bishop on April 14, 1998 by Archbishop Mar Varkey Vithayathil at St. Mary’s Basilica Ernakulam.

Mar Thomas Chakiath, the Auxiliary bishop and Protosyncellus, retired from his office on 10th September 2012 as he turned 75. Therefrom he shifted his residence to Niveditha, Chunangamvely.