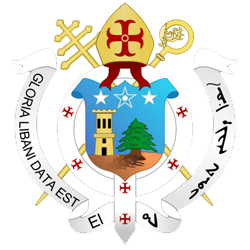 The Maronite Church is an Eastern Catholic sui iuris particular church in full communion with the pope and the worldwide Catholic Church, with self-governance under the Code of Canons of the Eastern Churches. It is headed by Patriarch Bechara Boutros al-Rahi since 2011, seated in Bkerke northeast of Beirut, Lebanon. Officially known as the Syriac Maronite Church of Antioch, it is part of Syriac Christianity by liturgy and heritage.

Establishment of the Maronite Church can be divided into three periods, from the 4th to the 7th centuries. A congregation movement, with Saint Maroun from the Taurus Mountains as an inspirational leader and patron saint, marked the first period. The second began with the establishment of the Monastery of Saint Maroun on the Orontes, built after the Council of Chalcedon to defend the doctrines of the council. This monastery was described as the "greatest monastery" in the region of Secunda Syria, with more than 300 hermitages around it, according to ancient records. After 518, the monastery de facto administered many parishes in Prima Syria, Cole Syria and Phoenicia. The third period was when Sede Vacante followed the Islamic conquest of the region and bishops of the Saint Maroun Monastery elected John Maron as Patriarch circa 685 AD, according to Maronite tradition. The Greek Orthodox Church of Antioch reestablished their patriarchate in 751 AD. Other centers of historical importance include Kfarhay, Yanouh, Mayfouq, and the Qadisha Valley.

Although reduced in numbers today, Maronites remain one of the principal ethno-religious groups in Lebanon, with smaller minorities of Maronites in Syria, Cyprus, Israel, and Jordan. Emigration since the 19th century means that about two-thirds of its three million members are located outside "The Antiochian's Range", where they are part of the worldwide Lebanese diaspora.