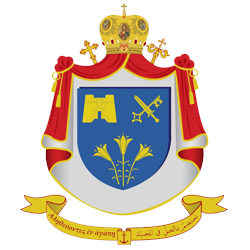 The Melkite Greek Catholic Church (Arabic: كنيسة الروم الملكيين الكاثوليك‎, Kanīsat ar-Rūm al-Malakiyyīn al-Kāṯūlīk; Greek: Μελχιτική Ελληνική Καθολική Εκκλησία; Latin: Ecclesiae Graecae Melkitae Catholicae) or Melkite Byzantine Catholic Church, is an Eastern Catholic church in full communion with the Holy See as part of the worldwide Catholic Church. It is headed by Patriarch Youssef Absi, headquartered in Cathedral of Our Lady of the Dormition, Damascus, Syria. The Melkites, Byzantine Rite Catholics, trace their history to the early Christians of Antioch, formerly part of Syria and now in Turkey, of the 1st century AD, where Christianity was introduced by Saint Peter.

The Melkite Church is related to the Greek Orthodox Church of Antioch. It is mainly centered in Syria, Lebanon, Jordan, Israel and Palestine. Melkite Greek Catholics are present, however, throughout the world by migration due to persecution. Outside the Near East, the Melkite Church has also grown through intermarriage with, and the conversion of, people of various ethnic heritages as well as transritualism. At present there is a worldwide membership of approximately 1.6 million. While the Melkite Catholic Church's Byzantine rite liturgical traditions are shared with those of Eastern Orthodoxy, the church has officially been part of the Catholic Church since the reaffirmation of its union with the Holy See of Rome in 1724.