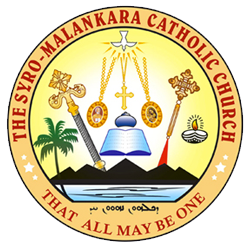 The Church “a people brought into unity in the unity of the Father, the Son and the Holy Spirit,” is an extension of the Mystery of the Incarnation and of the Kingdom of God inaugurated by Jesus Christ on earth and brought about by the mission given to the Apostles (Mt 28:18­20), for proclaiming and establishing, among all peoples, the Kingdom of God. While she slowly grows to maturity, the Church longs for the completed Kingdom. The Church through her presence and mission in the world continues this sanctifying ministry which Her Master initiated.

The  Apostles and their successors planted the Church of Christ in various places.  In divine providence (LG 23), India was blessed to have an Apostolic Foundation of the Church, through the evangelization mission of St.Thomas, one of the twelve Apostles of Jesus Christ. St. Thomas first landed at Malliankara (Kodungallur), started his mission in Malankara (also known as Malabar), the Southern tip of the Indian peninsula. Because of this Apostolic Tradition, this Church was then known as the Church of St. Thomas and the ecclesial community that originated from this apostolic tradition was known as “The St. Thomas Christians”, or “Malankara Nazranikal” and the head of the Church was known by the title “Metropolitan of All India.”

The Church of St. Thomas in India got rooted in the socio-cultural milieu of India and developed her own ecclesial, liturgical, spiritual and administrative traditions. This was in communion with the Universal Church through her ecclesial communion with the Churches of the Middle East. Besides the Metropolitan of all India, there was also a leader of the St. Thomas Christians, a priest with the title “Archdeacon of all India” who played a vital role in the day-to-day administration of the Church. This Apostolic Church was in Catholic Communion from the very early centuries. It came in contact with the Syro-Chaldean Church of the Middle East and consequently adopted the East Syrian Liturgy.

In the sixteenth century, this Apostolic Church came into direct relationship with the Western Church through the Portuguese missionaries. The Portuguese extended the Padroado agreement in their evangelisation programme over India and wanted to bring the Indian Church of the St. Thomas Christians under this jurisdiction. The Church in India which was rooted in the socio - cultural environment and which enjoyed autonomy in internal administration in communion with the Universal Church resisted the unwanted intervention of the Portuguese who brought with them the Western ecclesiastical traditions. The Portuguese missionaries, ignorant of the Oriental traditions of the Indian Church, had the conviction that anything different from the Western Church was schism and heresy.  Hence, they wanted to latinize the Syrian Christians of India.

In 1599 Archbishop Alexis Menezis convoked a Synod of Diamper (Udayamperoor) and imposed Latin practices and ritual traditions on the Apostolic Church of India. This was a blow to the identity of the Indian Church. However, the relation continued till the beginning of the second half of the seventeenth century. The Church of St. Thomas Christians could not withstand any more the denial of her autonomy. The initial resistance slowly gave way to discontentment, which ended up with the revolt in 1653 known as the Koonan Cross Oath.  Thus, the one Church of the St. Thomas Christians was split into two. A large majority of the broken-away-group hesitated to sever ties with Rome and they remained in communion with Rome, but, under the Latin Hierarchy. This group came to be called the Pazhayakûttukar, while the other was known as Puthenkûttukar. The latter group made several attempts for reunion with Rome safeguarding their autonomy and patrimony. Failing to re-establish communion with Rome, they happened to come in communion with the Jacobite Syrian Church of Antioch. These developments were not acts against the Apostolic See of Rome but against the Portuguese missionaries and their policy of Latinization. Even after the communion with the Jacobite See of Antioch, the Malankara Prelates Mar Thomas I (+1670), Mar Thomas II (+1686), Mar Thomas III (+1688), Mar Thomas IV (+1728), Mar Thomas V (+1765), Mar Thomas VI (+1808) and Mar Thomas VII (+1815) one after the other had attempted reunion with the Holy See, but all ended up in failure.

The Puthenkûr community came under the influence of the British missionaries in the 19th century. From 1815 till 1836, the year of the Synod of Mavelikara, the British missionaries propagated Protestant ideology among the Puthenkûttukar. This paved the way to the formation of the Mar Thoma Church under the leadership of Palakunnath Abraham Malpan and Mar Athanasios, who was consecrated Bishop by the Patriarch of Antioch. In order to outdo the reformists Mar Divannasios approached the Patriarch of Antioch. Patriarch Peter III arrived in Malankara and in the Synod of Mulanthuruthy (1876) the Malankara Church had to accept the authority of the Patriarch of Antioch over this Church. Since then, the Malankara Church had contented that the Patriarch’s authority was only in spiritual matters.

It was in this contentious context that Patriarch Mar Abdulla who came to Malankara, excommunicated Vattasseril Mar Divannasios in the year 1911. In this turbulent situation Fr. P.T. Geevarghese (later Archbishop Mar Ivanios) played a vital role in reinstating the position of the excommunicated Metropolitan and in regaining the self - governance of the Malankara Church. To ward off the undue interference of Patriarch Abdulla in the administration of the temporalities of the Church, Fr. P.T. Geevarghese with the blessing of Vattasseril Mar Divannasios contacted Abded M’siha, the Patriarch of Antioch from whom Mar Abdulla usurped the Patriarchal See of Antioch, and invited him to visit Malankara and to establish a Catholicate here. Accordingly, Patriarch Abded M’siha came to Malankara in 1912 and established the Malankara Catholicate. Thus, the Malankara Church in India became an Autonomous Church under its head the Catholicos. Moran Mor Baselios Paulos I (1912-1913), the first Catholicos, was called to eternal rest after a short period of five months on 13 May 1913.

After the demise of Catholicos Baselios Paulos I, the See remained vacant until 1925. That was a period of litigations in the Malankara Church and also a period of spiritual renewal. The litigation for Vattippanam (a fixed deposit of money in the name of the Church) and its after - effects in the community was at its zenith. Fr. P.T. Geevarghese who loved his Church was moved by the Spirit of God.  He realised that only a spiritual awakening of the Church would give a lasting solution to the problems of the Church. He himself took to sanyâsa (Religious Life) and founded the Order of the Imitation of Christ also called Bethany Ashram in the year 1919.  It is the first indegenous religious congregation started in the Malankara Church. The first Ashram was erected at Mundanmala of Ranni Perunad in Kerala. In 1925 he founded the community of the Sanyasins, the Sisters of the Imitation of Christ also called Bethany Madhom. From these two religious communities winds of spiritual fervour and renaissance blew across Malankara.

By a decision of the Episcopal Synod, on 30 April 1925 Moran Mor Baselios Geevarghese I, was installed as Catholicos. On the following day, the Catholicos consecrated Fr. P. T. Geevarghese with the name Geevarghese Mar Ivanios as the Bishop of Bethany.

On 1 November 1926, the Episcopal Synod held at Parumala near Tiruvalla, Kerala, decided to open negotiations again with Rome for communion with the Catholic Church in order to establish peace in Malankara. The Synod authorised Mar Ivanios, the Bishop of Bethany, to make necessary correspondence with Rome regarding communion. He earnestly followed up the mandate of the Synod.
The Second Catholicos expired on 17 December 1928. Moran Mor Baselios Geevarghese II succeeded the late Catholicos. On the day following his installation, he consecrated Mar Theophilos of Bethany and Mar Gregorios of Pampady as Bishops. In the meantime, the civil court’s decision on the litigation for Vattipanam was declared in favour of the Malankara Orthodox Church. This was a civil legal backing up for the Malankara Orthodox Church and consequently it stepped out from the endeavours of communion with Rome.

After prolonged negotiations, the plenary session of the Sacred Congregation for the Oriental Churches, which met on 4 July 1930, took the final decision on the issue of the communion of the Malankara Church.  But only Mar Ivanios the Metropolitan of Bethany and his suffragan Jacob Mar Theophilos stood by the early decision of the Synod.  Mar Ivanios and Mar Theophilos along with Rev. Fr. John Kuzhinapurath OIC, Deacon  Alexander OIC and Mr. Chacko Kilileth made their profession of faith before Bishop Aloysius Maria Benziger OCD of the Diocese of Quilon and entered into full communion with the Catholic Church on 20 September 1930.