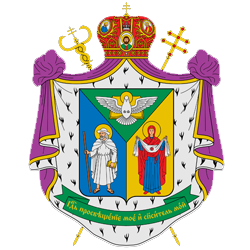 The church is one of the successor churches to the acceptance of Christianity by Grand Prince Vladimir the Great of Kyiv, in 988. It appeared in 1596 with the signing of the Union of Brest between the Ruthenian Orthodox Church (Polish–Lithuanian Commonwealth) led by Michael Rohoza and the Holy See.[5] Following the partitions of Poland, in 1808 the eparchies of the original Ruthenian Uniate Church (Latin: Ecclesia Ruthena unita) were split three ways between the Austrian Empire (3), Prussia (1), and the Russian Empire (5). Those three eparchies under Austrian jurisdiction were reorganized as the Greek Catholic Church soon after liquidation of all five eparchies that ended up in Russia. Established in 1807 the Greek Catholic Church in Austria became the only survivor of the original Uniate church of the Brest Union.

In 1963, the church was recognized as Ukrainian through the efforts of Yosyf Slipyi.