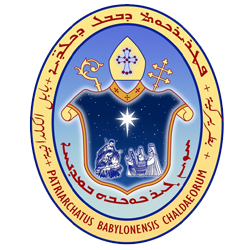 The Chaldean Catholic Church (Classical Syriac: ܥܕܬܐ ܟܠܕܝܬܐ ܩܬܘܠܝܩܝܬܐ‎, ʿīdtha kaldetha qāthuliqetha; Arabic: الكنيسة الكلدانية‎ al-Kanīsa al-kaldāniyya; Latin: Ecclesia Chaldaeorum Catholica, lit. 'Catholic Church of the Chaldeans') is an Eastern Catholic particular church (sui juris) in full communion with the Holy See and the rest of the Catholic Church, and is headed by the Chaldean Catholic Patriarch of Babylon. Employing in its liturgy the East Syriac Rite in the Syriac language, it is part of Syriac Christianity. Headquartered in the Cathedral of Mary Mother of Sorrows, Baghdad, Iraq, since 1950, it is headed by the Catholicos-Patriarch Louis Raphaël I Sako. In 2010, it had a membership of 490,371, of whom 310,235 (63.27%) lived in the Middle East (mainly in Iraq).

The United States Commission on International Religious Freedom, reports that, according to the Iraqi Christian Foundation, an agency of the Chaldean Catholic Church, approximately 80% of Iraqi Christians are of that Church. In its own 2018 Report on Religious Freedom, the U.S. Department of State put the Chaldean Catholics at approximately 67% of the Christians in Iraq. The 2019 Country Guidance on Iraq of the European Asylum Support Office gives the same information as the U.S. Department of State.