DIOCESE OF QUILON
the most ancient Indian Diocese

The Diocese of Quilon, the first diocese in India and the cradle of Indian Christianity is proud to welcome you to this web portal. The vibrant catholic community of Quilon (Kollam) cherishes its unique history of being founded by St. Thomas the Apostle of Jesus, nurtured by the great apostles St. Bartolommeo and St. Francis Xavier and fostered by the saintly martyrs like Archbishop Jordanus Catalani de Severac and Giovanni Marignoli.

Since the latter half of the 12th century, Quilon became the centre of missionary expeditions by Franciscan and Dominican Missionaries. In 1329 Pope John XXII (in captivity in Avignon) erected Quilon as the first Diocese in the whole of Indies as suffragan to the Archdiocese of Sultany in Persia through the Apostolic Bull, “Romanus Pontifex” dated 9th August 1329.  By a separate Bull “Venerabili Fratri Jordano”, the same Pope, on August 21, 1329 appointed the French Dominican friar Jordanus Catalani de Severac as the first Bishop of Quilon. (Copies of the Orders and the related letters issued by His Holiness Pope John XXII to Bishop Jordanus Catalani and to the diocese of Quilon are documented and preserved in the diocesan archives).

According to tradition, St. Thomas the Apostle established seven churches along the southern part of west coast of India, and Quilon is the second in the list of the above seven churches. (There is absolutely no historical evidence to prove that St. Thomas sailed to Kodungallur, in Kerala. However there is reliable evidence to show that he had reached north western India up to the banks of the river Sindhu, near the great ancient city of Taxila(Takshashila) now in Pakistan, was martyred there, and his relics were later taken to Edessa in Turky. It is difficult to believe that he had further proceeded to anywhere in southern part of India.)

The glorious epoch of Christianity in Quilon and perhaps of this country was in the first half of the ninth century when the Christians of Quilon enjoyed royal privileges and had the monopoly of trade in “Venad”. The copper plate bestowing trading rights and authorization for rebuilding the city of Kollam as well as restructuring its administration, to the Christian community is the most ancient official document of Christianity in India. John of Monte Corvino, a member of the Societas Peregrinantium Pro Christo on his way to China , landed in Quilon in 1291 and ministered the Christian community. The Venetian traveller Marco Polo who visited India in 1292 testified to the presence of a Christian community in Quilon.

Erection of the Ancient Diocese of Quilon and its First Bishop

Since the latter half of the 12 th century, Quilon became the chief centre of missionary expeditions. Franciscan and Dominican Missionaries in the 13 th and 14 th centuries visited Quilon and their letters confirm the existence of a vibrant Christian community in Quilon.

In 1329 Pope John XXII (in captivity at Avignon ) erected Quilon as the first Diocese in the whole of Indies as suffragan to the Archdiocese of Sultany in Persia through the decree “Romanus Pontifix” dated 9 th August 1329 . By a separate Bull “Venerabili Fratri Jordano”, the same Pope, on August 21, 1329 appointed the French Dominican friar Jordanus Catalani de Severac as the first Bishop of Quilon.

( Copies of the Orders and the related letters issued by His Holiness Pope John XXII to Bishop Jordanus Catalani and to the diocese of Quilon are documented and preserved in the diocesan archives).

The ancient diocese of Quilon had extensive juristriction over modern nations of India, Pakistan, Afghanistan, Bangladesh, Burma and SriLanka.

Jordanus Catalani arrived in Surat in 1320. After his ministry in Gujarat he reached Quilon in 1323. He not only revived Christianity but also brought thousands to the Christian fold. He came again to Quilon as the bishop in 1330. He built a church at Quilon, known as St. George's Church . His book “ Mirabilia Descripta ” is a rare work on plants, animals and the people of India and of other countries in Asia and this is an authoritative work on India dating 800 years back. This book is considered to be a landmark chronicle of its time written around 1324.

The first Bishop of Quilon was received with great jubilation by the faithful of Quilon. He brought a message of good wishes from the Holy Father to the local rulers. As the first bishop in India , he was also entrusted with the duty of spiritual nourishment of the Christian community in Calicut , Mangalore, Thane and ‘Broach' (north of Thane). He was martyred by Muslims in Bombay in 1336. In the year 1348 John De Marignoli, the Papal Legate to China on his way back to Rome sojourned here for 14 months. With the martyrdom of the first Bishop, the See of Quilon remained vacant. There was a ‘historic gap' with regard to ecclesiastical administration in India till the Portuguese landed here in 1498 AD. It follows from the Friar Jordanus tradition that Catholicism – not just Christianity – is deep rooted in Quilon. It is now settled that Latin Catholicism was brought to Kerala in the early fourteenth century by the French Dominicans. It is now evident that while Bishop Jordanus introduced Latin Catholicism, the Portuguese popularized it. The fact that Quilon is the founding seat of the Catholic Church in India is often found obscured in the midst of history.

John De Marignolli of St. Lorenzo in Florence, joined the Franciscan order and was consecrated bishop in 1338 AD. He was chosen as legate to China by Pope Benedict XII (1334-1342). He preached in China and on his way back from China , he landed at Quilon and lived there for over a year, preaching in St. George's Church , which was founded by Jordanus. In 1338 during the Pontificate of Pope Benedict XII (1334-1342) the great Khan of Peking in China sent a great delegation of ambassadors to the Pope at Avignon and were given a royal reception by the Pope. They requested the Pope to send a legate who would be wise, capable and virtuous to care for their souls. Responding to their request the Pope chose John De Marignolli as his legate to China and he accompanied the ambassadors of Great Khan on their homeward journey. Marignolli departed with a great number of friars and precious gifts for Khan, princes and sovereigns. They departed in March 1339 and after a long and perilous journey reached their destination, Khanbalique in 1342 and were received by the Great Khan, who was the last of the Mongol dynasty in China.

After three years of mission Marignolli decided to return to Europe . On his departure on 26 December 1345 he set out for Quilon where he arrived on 23 March 1346 . The Christians of Quilon warmly welcomed him. He lived there for over a year, and preached in St. George's Church , founded by Jordanus.

He concentrated himself in the Latin Church of St. George founded by Bishop Jordanus. He preached in this Church and adorned the Church with paintings. He could not do much of missionary activity here since he became sick with dysentery during his stay at Quilon. When he recovered he visited Cape Comorin the extremity of Indian Peninsula where he erected a marble pillar mounted by a cross in full view of Ceylon . It seems that he was an ambitious man and was desirous that the good people of Quilon should never forget him and that was the intention of the erection of the marble pillar. The column, which was to endure till the world's end soon crumbled under the corroding influence of the elements and the inscriptions, were destroyed. Later a wrong tradition developed, attributing this column to St. Thomas. Marignolli set for Sumatra and Ceylon in July 1347. In September 1348 he came back to India. He left India in 1350 AD.

The Portuguese missionaries made Quilon one of their most important centers of evangelization. St. Francis Xavier laboured here for several years. He established a Seminary in Quilon and his letters to Rome give testimony of a dynamic Christian community in Quilon.

The history of Quilon Diocese from 16 th century to 20 th century was linked to the battle of European empires for the control of Malabar Coast . The Portuguese who arrived in Quilon in 1503 revived and strengthened the Christian community. They built several churches and monasteries and established new centers of Christianity. Quilon remained a territory under the Franciscans until 1533 AD when the Diocese of Goa was established and Quilon became part of the new Diocese. However in the year 1557 AD, when Cochin was erected as a suffragan Diocese of the Archdiocese of Goa, Quilon became part of Cochin Diocese.

The Portuguese tenure in Quilon has contributed much to its growth and development. Their primary concern was the abolition of the caste system. They made education available to all communities. They started presses, which were a set up that made available books in cheaper cost, and thus people began to read and acquire knowledge. It is a little known fact that one of the oldest presses in India was established at Tangasseri. The press was attached to the San Salvador Seminary of the diocese established by a Jesuit Priest, Fr. Jao de Faria. The first book in Kerala ‘ Doctrina Christa' was published from Quilon on October 20, 1578 . The Harvard University library possesses a surviving copy of this book. It was printed in the neo-Tamil script of the time in Kerala. The one printed at Quilon, Doctrina Christs en Lingua Malabar Tamil is a translation of St. Francis Xavier's work in Portuguese, translated by Fr. Henrique and Father Manual de San Pedro. The second page of the book mentions that it was printed on 20 th October 1578 at the press of the ‘Saviour'. Till today that that place of the press is known in Tangasseri (near the Bishop's House) as ‘Achukuddom Parambu' ( Press Place ).

In 1661 the Portuguese who tasted defeat from the Dutch, left Quilon. The Dutch who took control over Quilon, destroyed catholic churches and persecuted Catholics. The Christians of Quilon went through a dark period till 1741. The Dutch, defeated by Marthandavarma, the King of Travancore, had to leave Quilon. Yet another dark period for the Church in Quilon was in 1808 when Velu Thampi Dalava unleashed a fierce persecution on Christians.

The Christian community of Quilon after remaining a long period without bishops became a part of the diocese of Goa in 1534, when Goa was made an Episcopal see, suffragan to Funchal in the Madeiras . When Goa was raised to an archbishopric on 4 February 1557 , Cochin was made suffragan diocese to the Arch-diocese of Goa and Quilon became part of the Cochin diocese. Pope Gregory XVI created the Vicariate of Malabar by his bull Multa Praeclare of 24 April 1838 and suppressed the diocese of Cochin and attached that territory along with Quilon to the Vicariate of Malabar (Verapoly). Later the Vicariate of Malabar was divided into three vicariates, Verapoly, Mangalore and Quilon by the Holy See on 12 May 1845 . The apostolic vicariate of Quilon was extended from Arabian Sea to the ‘Sahyan' Mountains and from Cape Comorin to Pamba River , which was provisionally entrusted to the Belgian discalced Carmelite missionaries.

The separation of Quilon, as a new Vicariate Apostolic, suffragan to Verapoly was decreed and was provisionally executed on May 12, 1845 , entrusting it to the Belgian Carmelite Missionaries, and finally confirmed as a separate Vicariate Apostolic on March 15, 1853.

On April 24, 1838 the Holy See established the Vicariate of Malabar with headquarters at Verapoly and Quilon became part of the new vicariate. The separation of Quilon, as a new Vicariate Apostolic, suffragan to Verapoly was decreed and was provisionally executed on May 12, 1845 , entrusting it to the Belgian Carmelite Missionaries, and finally confirmed as a separate Vicariate Apostolic on March 15, 1853 . With the establishment of the Hierarchy in India , Quilon again became a Diocese on September 1, 1886 with jurisdiction over the territory from Cape Comerin to Pampa River , in the north.

This arrangement was effected in 1853, and on the establishment of the hierarchy in 1886 it was finally elevated into an episcopal see, suffragan to Verapoly. 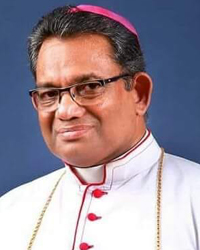 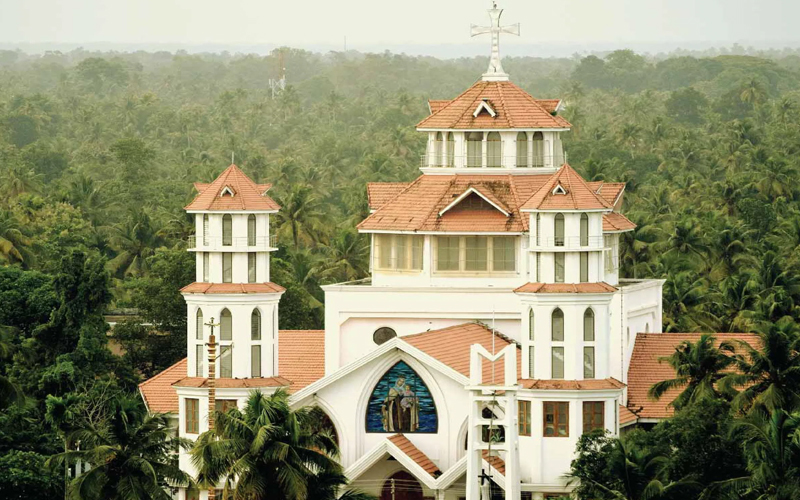