The Diocese of Kannur has a history that goes to the 15th century. It was with the advent of the Portuguese sailor, Vasco de Gama who landed at Calicut on 20th May 1498, that the missionaries had access to this area. Fr. Pedro de Kovilham, the first missionary who came to Malabar with Vasco de Gama died on 31st July 1498. As the Portuguese traders could not get along with the ruler of Calicut, "the Zamorin", they moved to Kannur and the "Kolathiri", king of Kannur welcomed them.

The four Franciscan missionaries with Hovavo Nova, their group leader were allowed to build a chapel in Kannur. (This is the place where the Holy Trinity Cathedral of the Diocese of Kannur is situated). In 1505, the Portuguese Viceroy, Francis de Almeida, established the famous fort of St. Angelos and built the church of St. James within the premises of the fort.

Several Portuguese colonies were formed in the 16th century along the coastal belt of the Arabian Sea. A church was built by Dominge Rodrigues in Tellicherry for the Christians there. When the British East India company established the Tellicherry Fort in 1708, the Jesuit fathers renovated this church. Fr. Dominic OCD in 1736 established a church in Mahe to look after the spiritual needs of the French Catholics settled there. This church came to be known "the Shrine of Mahe'', or the Shrine of St. Theresa of Avila . In 1807, St. Michael's School was established for the education of boys and in 1871 St. Teresa's School for girls in Kannur was started by the Apostolic Carmelites. In the 1920's Fr. Faustine Aranha, began his work among the 'Dalits' of the Kanhangad region

The diocese of Calicut was spread out to an area of 13051 Sq. Kms. in six revenue districts. In the context of such an extensive area there was the need of a new diocese for the benefit of the faithful. Bishop Maxwell Noronha, in consultation with the priests, religious and the laity requested the Holy See to establish a new diocese at Kannur. The Holy Father, Pope John Paul II by the Apostolic Brief, ‘cum ad aeternam’ dated 5th November 1998, created the Diocese of Kannur from the Diocese of Calicut. On the same day Rt. Rev. Dr. Varghese Chakkalakal who was a professor at St.Joseph's Seminary, Mangalore, and a priest of the diocese of Calicut, was elected the Bishop of Kannur and the Bishop elect was consecrated on 7th February 1999 and he took charge of the diocese on 8th February 1999. The Bishop has taken as his motto "according to your will" "Daivathirumanassinu Vidheyathuvam". The new diocese comprises the territory of the civil district of Kannur to the north of Mahe river, excluding Pallur, Chelakara, Panthakal and Chenkallai which belong to the municipality of Mahe and the territory of the civil district of Kasaragod which falls to the south of Chandragiri river. The erection of this new diocese was a historical event for Kannur which has 500 years of Christian tradition. The establishment of the new diocese on the auspicious occasion of the Platinum Jubilee of the Diocese of Calicut was welcomed with cheer, by the people who consider the diocese of Kannur as a gift of God to this region.

The new diocese comprises the territory of the civil district of Kannur to the north of Mahe river, excluding Pallur, Chelakara, Panthakal and Chenkallai which belong to the municipality of Mahe and the territory of the civil district of Kasaragod which falls to the south of Chandragiri river. The erection of this new diocese was a historical event for Kannur which has 500 years of Christian tradition. The establishment of the new diocese on the auspicious occasion of the Platinum Jubilee of the Diocese of Calicut was welcomed with cheer, by the people who consider the diocese of Kannur as a gift of God to this region.

In 2012 Bishop Varghese Chakkalakal was transferred to Calicut and the People of God in Kannur waited for their new shephered. As an swer to their prayers on 1 February 2014 Msgr. Alex Vadakumthala the Vicar General of the Archdiocese of Verapoly was elected the new Bishop of Kannur and he was consecrated the Bishop on 23 March 2014. The Diocese is now under the process of its growth under the able leadership of Dr Alex Vadakumthala, the new Bishop.

Under the patronage of Bishop Leo Proserpio, in 1937, Fr. Peter Caironi S.J started his mission among the Pulayas. This marginalised community was given proper housing facilities, education and the possibility of a more human existence. Fathers John Sequeira, Joseph Taffrel S.J, James Monthanari S.J, Aloysius Del Zotto S.J, Michael Vendramin S.J had tried hard to evangelize this area. Fr. Linus Maria Zucol S.J of revered memory, who continued to work in this area, became a mission legend. These missionaries were supported by the Canossian sisters under mother Antoneitta Sala, the Deena Sevana Sabha founded by Mother Petra, the Ursulines and the others. Consequently, we have today about 33,900 Catholics spread over 60 parishes and 14 mission stations, in the two revenue districts of Kannur and Kasaragod.

The diocese of Kannur is blessed with the visit of St Francis Xavier. The archives of the Society of Jesus in Rome testify that St. Francis Xavier, the patron of missions visited Kannur on 24th December 1542 and also on 7th November 1549. The unmatched dedication and commitment of the Italian missionaries who followed this missionary giant gradually became the stalwarts of the Catholic faith in this region.

The rich faith tradition of the diocese has contributed to the Church two Servants of God; Mother Petra Moenningmann of the Deena Sevana Sabha and Sr Celine Kannanaikal UMI whose beatification is under process.

The Northen Kerala is known for its cultural diversity. It is rich in folklores and related cultural panorama. People are deeply spiritual and worships and religious practices are unique and deep. The people belong to different religious background including Hindu, Muslim, Christian and Tribals. Kannur is gifted with natural beauty and is known for “Thira and Thari” which means the cultic Hindu practice of worship and indigenous handloom works.

The western boundary of the Diocese is the Arabian Sea and a large number of people find their livelihood from the sea. The majority of the population is daily wage earners and a minority is small scale farmers and agriculturists. The fishermen follow the traditional methods for fishing for their livelihood though some of them are employed in large fishing boats owned by merchants. Consequently majority of the fishermen flock has to adjust with the climatic changes and depend on favourable weather. As there are no many industrial institutions the daily wage earners are to work in the fields and farms. Agriculturists and farmers depend on the natural resources for the cultivation and traditional ways for marketing. The working community is not organized and they need more attention and support.

Challenges and the Role of the Church

As the Church in Kannur is in the midst of cultural and religious diversities, she has a major role to witness Christ to the people of other faith. The church had reached out thousands of people and as a result more than twenty thousand people have embraced Christianity since the beginning of Chirackal mission. The rapid changes in the life style and socio-economic and cultural dimensions demands a new way of evangelization today. The Church needs to reach out to people as a mother who takes care of her children and bring them up to stand on one’s on foot. The new strategies might also include interventions in socio-economic-cultural dimensions. The Diocese has envisaged inter religious dialogues that would make available the fund of gospel message to the people around. Ongoing faith formation and evangelization to the Catholic community also is a primary point for concern. An integrated evangelization strategy which includes both spiritual and temporal development of the people is the need of the time.

The church of Kannur has to address the problems of the people not only the Catholics but also of the other faith denominations. The people are to be supported by the Church both spiritually and financially that they may be self sufficient in the future. As a result the diocese is bound to take up social activities that ensure security to the people including every poor of the region. Kairos- the Diocesan Social service society involves in developmental programmes with the help of other stakeholders.

The Diocese of Kannur initiated its involvement in the educational field with the aim to provide quality education that the future generation may be competent in the fast growing world. The Diocese facilitates self help groups and other social units to enhance the financial conditions of the people. During the span of last 15 years the diocese was able to provide more than 7500 houses 12,000 sanitary facilities, wells and other numerous basic necessities to the poor by collaborating with some missionaries.

As the people of the place is poor and under privileged the diocese also involves in charitable activities. “When you did it to the least of my brethren you did it to me” the words of the compassionate love of the Divine Master are relived in the diocese. There are two orphanages run by the diocese. An institution for the street children provides education and facilitates rehabilitation to 17 abandoned girls of the street. Diocese is aware of the plight and struggle of the mentally ill people who are abandoned by the family and society. Holy Mount- a rehabilitation centre for the mentally ill and challenged takes care of destitute mental patients. There are 29 women and 26 men who are under treatment.

There are also many such interventions needed in the field of education, health and other areas. In collaboration with the religious institutes working in the diocese there have been established many similar institutions. The number of institutions within the jurisdiction of the diocese is as follows:

One of the areas where the church needs to focus is health care. There is only one hospital in the Diocese which is managed by the Canossian Sisters. It was established as a dispensary 50 years ago and now it has grown into a Hospital with 300 beds. This is insufficient for the health care of the common people as the hospitals in private sector are unaffordable for the working people. Health care facilities, including palliative care and rehabilitation of the AIDS, Mental Patients need to be made available to the weaker strata of the society. The dispensaries, clinics and similar institutions we have today, are not enough to meet the needs of the people.

The diocese of Kannur has its strong foundation on the providence of Christ. Faith formation and empowerment of the people are the major concerns. New education policies help the new generation to grow into integrated persons. Diocese also responds to the need of the society regarding the environment and other social issues. The presence of the diocese in this area reflects the face of Christ to the people. 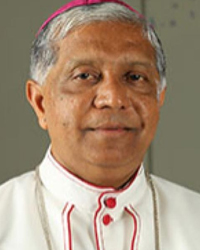 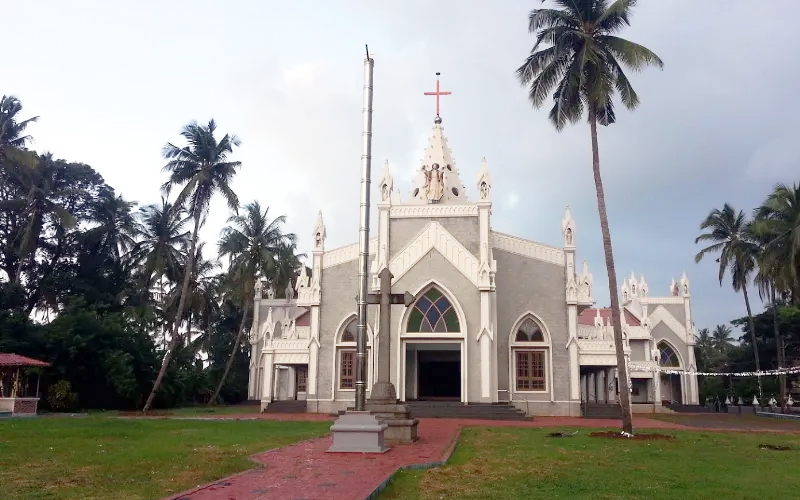