The Malankara Catholic Eparchy of Bathery, established in 1978 by Pope John Paul II and formally inaugurated on 2 February 1979 has been the fruit of a long term missionary zeal for greater geographical and religious expansion and diversity of the Syro-Malankara Catholic Church. In 1958, the Holy See extended the jurisdiction of the Eparchy of Tiruvalla further towards the North of Kerala and some districts of Karnataka and Tamilnadu. His Excellency the late Zacharias Mar Athanasios pioneered the Malabar mission which resulted in an unprecedented evangelisation process, accelerating the Reunion Movement which resulted in the mushrooming of parishes and mission centres in the North. Most Rev. Zacharias Mar Athanasios requested the Holy See to bifurcate the Eparchy of Thiruvalla and to erect a new Eparchy with Sulthan Bathery as its headquarters. Pope John Paul II erected the Eparchy of Bathery on 28 October 1978 as a suffragan eparchy of the Syro-Malankara Catholic Archieparchy of Tiruvalla and Rev. Dr. Cyril Malancharuvil was appointed as the first Bishop of Bathery. Most Rev. Dr. Cyril Mar Baselios officially took charge of the Eparchy of Bathery on 2 Ferbruary 1979 and the new Eparchy was inaugurated during the solemn function held at St. Thomas Pro-Cathedral, Sulthan Bathery. The Eparchy of Bathery comprises the district of Nilgiris of Tamil Nadu State; the civil districts of Wayanad, Malapuram, Kozhikode, Kannur, Kasargode of Kerala State . The Ecclesiastical districts of the Eparchy are Bathery, Pulpally, Nilgiris, Nilambur, Edakkara, Kozhikode, Mananthavady, Kannur, Kalpetta and Kasargod.

On 18 December 1996 His Holiness Pope John Paul II appointed Very Rev. Fr. Varghese Ottathengil as the new Bishop of Bathery after Cyril Mar Baselios.He was consecrated a bishop on 5 February 1996 at Bathery by His Grace Cyril Mar Baselios. He received the name Geevarghese Mar Divannasios.

The eparchial headquarters is situated in Sulthan Bathery in the district of Wayanad in Kerala. Most Rev. Dr. Joseph Mar Thomas was appointed as the third Bishop of the Eparchy of Bathery and enthroned on 13 April 2010 by His Beatitude Moran Mor Baselios Cleemis Catholicos at St.Thomas Cathedral, when his predecessor Most Rev. Dr. Geevarghese Mar Divannasios was given the charge of the newly erected Eparchy of Puttur. Today the Eparchy of Bathery which started its journey of evangelisation with around 8500 Malankara Catholic faithful in 43 parishes and mission stations is the third largest diocese with His Excellency Most Rev. Dr. Joseph Mar Thomas, the charismatic and dynamic prelate shepherding the Eparchy with enhanced vigour and vitality. The consecration of the St. Thomas Cathedral, one of most aesthetically beautiful Cathedrals in India on 20 September 2016 has opened up the portals of the Eparchy of Bathery to pilgrims from across the world. In the words of Dr. Joseph Mar Thomas it was like opening the gates of Christianity to the human community irrespective of colour, caste, creed or religion. As of  2016 there were nearly 35,000 Malankara Catholic faithful in 110 parishes and mission stations in the Eparchy of Bathery.

As a result, thousands of families and some priests from prominent families came into full communion of the Catholic Church. Within a short period of time, many parishes and mission stations were established in different parts of the Eparchy.

His Beatitude Moran Mor Cyril  Baselios Catholicos of revered memory,  gave great leadership for all the pastoral activities. The far-sighted vision and spiritual leadership of Mar Baselios led the Eparchy to the heights of its growth.

The Apostolate of the Eparchy is organized under various departments. The faith formation of the children, youth, men and women are guaranteed by the Apostolate of Catechism, Youth Ministry, ‘Pithrusangam’ and ‘Mathrujyothis’. The Bible Apostolate Department takes initiative for the promotion of Bible studies and distribution of Bibles among the faithful.The family apostolate department gave guidence and councelling to the families and prepare them to lead good christian life. Malankara Catholic Association is the official organ of the Malankara Catholic faithful for its Social involvement and leadership. The Eparchy also gives due importance to its social commitment, taking the life situation of the people it encompasses seriously. The Eparchy has a well chalked out social programme aimed at stimulating the fundamental growth of its children both male and female. The Social Service Centre, named ‘Shreyas’ is the official organ of the Eparchy for promoting Social justice and fellowship. This has been set up with a view to create a more humane and just society, based on scriptural values implemented scientifically through programmes of mass education, mass mobilization and mass action. The Eparchy has also a network of  Educational Institutions under the Corporate Educational Agency and Higher Education Board to impart a value based education to the youth irrespective of caste and creed. Pazhassi Raja  College is its first higher education Institution. At present the Eparchy has got Gurudev College Kannur, Alphonsa College, Bathery, Fathima College, Moothedam and the Baselios College of teacher Education. These Institutions and other educational initiatives act as an excellent network of the educational apostolate of the Eparchy of Bathery.

The Eparchy had the honour of hosting the Diamond Jubilee of the Malankara Reunion Movement on 20, 21 September 1990 at Sulthan Bathery. The Eparchy also hosted the 85th Reunion celebrations. His Eminence Wladislao Cardinal Rubin, the former Prefect of the Congregation for the Oriental Churches visited the Eparchy on 9 January 1981 and inaugurated the Pastoral Council and Parish Senate of the Diocese.

The Eparchy of Bathery was blessed by the visit of His Eminence Simon D. Cardinal Lourdusamy, the then Prefect of the Congregation for the Oriental Churches on 25 August 1987.

After 17 years of inspiring leadership in the Eparchy, Most Rev. Dr. Cyril Mar Baselios left for Trivandrum on 12 December 1995 to be appointed as the Metropolitan Archbishop of Trivandrum and the Head of the Malankara Catholic Church. His Grace Most Rev. Cyril Mar Baselios took charge of the Church and of the Archdiocese of Trivandrum on 14 December 1995. Later His Beatitude Moran Mor Cyril Baselios Catholicos became the first Major Archbishop Catholicos of the Church. From 14 December 1995 till 5 February 1997, the Eparchy was led by Rt. Rev. Msgr. ThomasThannickakuzhy as its Administrator. On 18 December 1996 His Holiness Pope John Paul ll appointed Very Rev. Dr. Varghese Ottathengil, the then Rector of St. Mary’s Malankara Major Seminary, Trivandrum as the new Bishop of Bathery. His Excellency Geevarghese Mar Divannasios was consecrated Bishop on 5 February 1997 at Mar Athanasios Nagar, Bathery by His Grace Cyril Mar Baselios, the Head of the Malankara Catholic Church.

Rt. Rev. Msgr. Dr. lsaac Thottunkal was the Vicar General of the Eparchy from 1999 to 2001. Then he was appointed Apostolic Visitator to North America & Europe and Auxiliary Bishop of the Archieparchy of Trivandrum, on 18 June 2001. Rt. Rev.  Msgr. lsaac Mar Cleemis was consecrated as bishop on 15 August 2001 at St. Mary’s Malankara Catholic Church, Thirumoolapuram, Thiruvalla. He succeeded His Beatitude Moran Mor Cyril Baselios as the next Catholicos of the Archiepiscopal Church and was crowned the Prince of the Catholic Church as His Beatitude Moran Mor Baselios Cardinal Cleemis Catholicos.

A new Eparchy for the Karnataka region was a long cherished dream of the Malankara Catholic faithful in the region. This dream was fulfilled at the moment of the solemn declaration of the new Eparchy of Puttur on 25 January 2010.  On 25 January 2010, as per the decision of the Holy  Episcopal Synod of the Syro - Malankara Catholic Church, and having consulted the Apostolic See of Rome, His Beatitude Moran Mor Baselios Cleemis Major Archbishop-Catholicos, erected the Eparchy of Puttur bifurcating the Eparchy of Bathery. The territory of the Eparchy of Puttur consists of the civil districts of Dakshina Kannada, Chamarajnagar, Chickmanglur, Hassan, Kodagu, Mandya, Mysore, Shimoga and Udupi of Karnataka State.

On the same day His Beatitude Moran Mor Baselios Cleemis transferred Most Rev. Dr. Geevarghese Mar Divannasios from the Eparchy of Bathery and appointed him the first Bishop of the newly erected Eparchy of Puttur.

His Beatitude then elevated Most Rev. Dr. Joseph Mar Thomas, the then   Apostolic Visitator to North America and Europe and the Auxiliary Bishop of the Major Archieparchy of Trivandrum, as the third Bishop of the Eparchy of Bathery. Under his visionary sagacity, the Eparchy has reached heights of glory showing a remarkable and matchless growth and development  with its various organs spreading its care to the marginalized and the weaker sections of society  with a compassion and futuristic vision beyond words. He has become the beacon light of hope and the true Apostle of Christ for an entire people.

The Eparchy celebrated its Ruby Jubilee on february 2018. And H.B Moran mor Baselios Cardinal Cleemis Catholicos inagurated the Jubilee by celebrating the Holy Eucharist . Most Rev. Dr. Joseph Mar Thomas delivered the jubilee year and it is concluded with the Holy Eucharist on 26 ,27 Aprill  2019 by His Grace Thomas Mar Koorilose Arch Bishop of Thiruvalla. 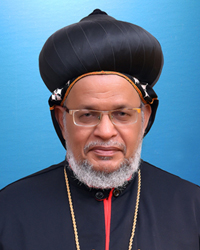 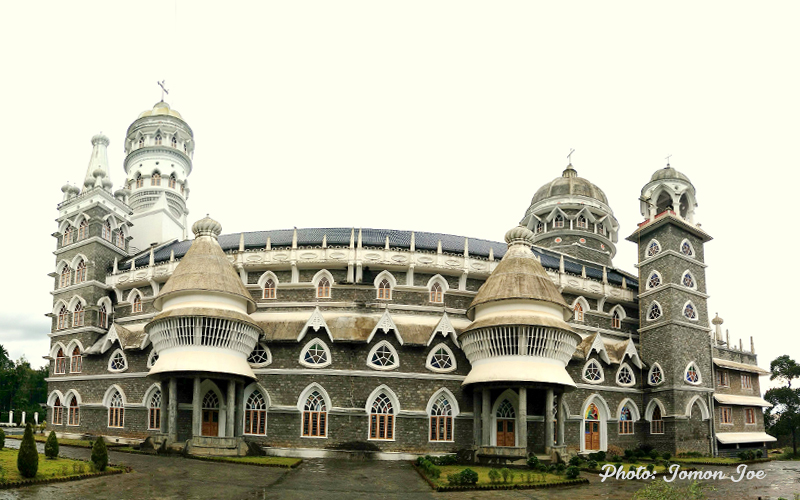