The Basilica of Our Lady of Snow Pallipuram 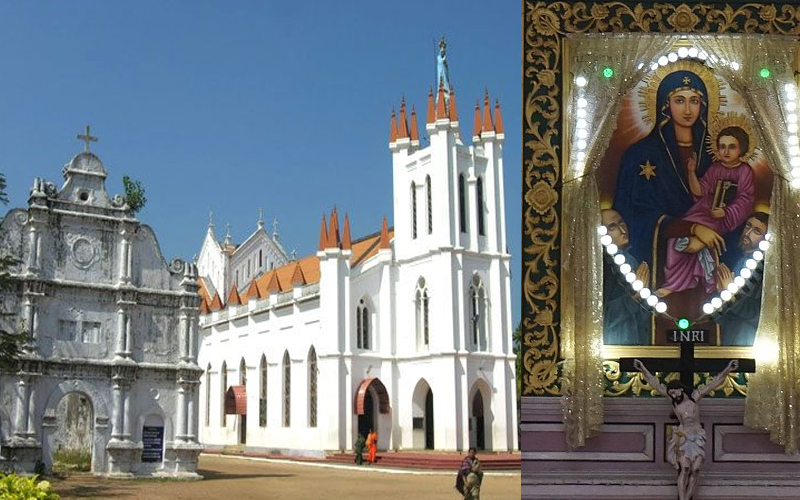 The Basilica of Our Lady of Snow Pallipuram

The Basilica of Our Lady of Snow, Pallippuram, Ernakulam, Kerala, is a minor basilica. The basilica decree was issued on 27 August 2012. The raising of the Pallippuram church was officially announced at the conclusion of the silver jubilee celebrations of the diocese on 7 October.

The history of the Our Lady of Snow Church goes back five centuries when the Portuguese built a fort at Pallippuram and immediately followed it up with a church dedicated to Our Lady. The church was established in 1503, renovated in 1931 and rebuilt in 2006. The church came under the diocese of Kochi in 1557 and became a parish in 1577. The Kottapuram diocese was formed by dividing the Varappuzha diocese.

In 52 AD, St. Thomas, the apostle landed in India at Maliankara near the port of Muziris. This Port was also called Muchiri because the River Periyar's branches out into three (In [Malayalam] these three branches were called Muchiri or three broken lips) before it joins the Arabian Sea. This was one of the oldest and busiest port on the West Coast of India known to the world by more than twenty different names. In the biggest ever flood known in the history of Kerala, this Port was washed off in 1341 AD and a new Island known as Vypin was formed near Kochi or Cochin in the Vembanad Lake. People from various places migrated to the new island.

The Portuguese built a fort at Pallipuram as a watchtower in 1503. It is the oldest existing European fort in India. At the same time, the Portuguese built a church for the believers of the surrounding area and dedicated it to Our Lady. It was the church at that time where Christians in that area gathered together for worship.

During the Mysorean invasion of Kerala in the 18th century, Tipu Sultan was camped near the River Chalakkudy in order to attack parts of Travancore. He destroyed most of the Christian and Hindu places of worship. The local people gathered together in the church and prayed to Our Lady for her help. At that time, there was a mist (snow) spread around the church and Tipu and his military could not see the church or the surrounding areas. They thought it was part of the Arabian Sea. There was also a high flood in the River Periyar and Tipu lost a huge part of his military and returned to Mysore. It was the miracle that changed the name of Our Lady to Manjumatha (Our Lady of Snow).

On 27 August 2012, Pope Benedict XVI issued a decree and raised its status to that of minor basilica. It is the 20th Basilica in India and the eighth in Kerala (as of August 2012). At the time of the jubilee of the Kottapuram Diocese, the papal nuncio to India, His Excellency Archbishop Salvatore Pennacchio officially declared the decree.