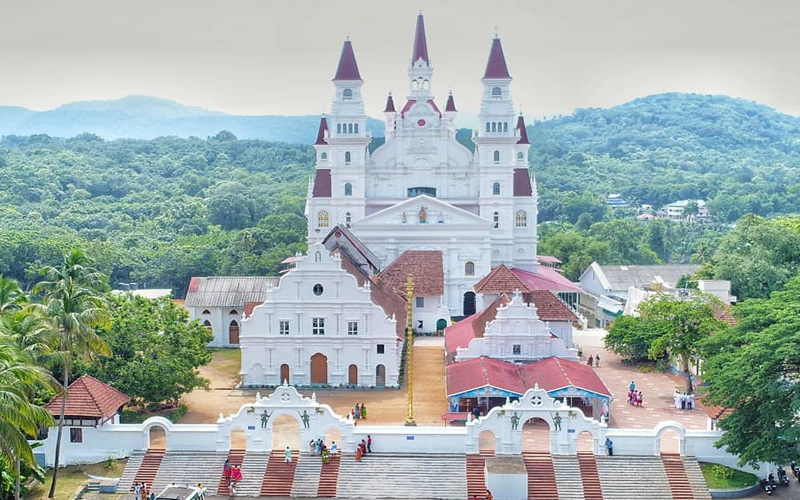 The centuries-old, twin-churches of Ramapuram near Pala is one of the old churches existing in Kerala. The twin-church complex at Ramapuram consists of a smaller church dedicated to St. Augustine and a larger one dedicated to the Blessed Virgin. While the church dedicated to St. Augustine dates back to around 1450, the one dedicated to the Blessed Virgin was erected in 1864. The structures represent a unique architectural style prevalent in the early colonial period with the Persian facade showing marked influence over the Portuguese style. The Roman columns and the veranda too are rare features of the churches of a bygone era. The church belongs to Pala diocese of Syro Malabar Catholic Church.

The two churches which form a contiguous monument, had been an active element in the Syrian Christian history for the past nearly five centuries. It was the controversial Archbishop Alexis de Menezis who took the initiative in rededicating the then church (the smaller one which was in the name of St. Mary, originally) to St. Augustine; it was from here that Paremmakkal Thoma Kathanar, the Governor of Kodungallur, ruled the Syrian Christian community and it is here his mortal remains are interred; it was here that the church council met for centuries. Above all, it is here the mortal remains of the Blessed Thevarparambil Kunjachan remains interred.

The newly constructed church is all set to make a historic entry into the list of the biggest churches in Asia.The church 70,000 sq.ft big and has a seating capacity of 3,500. The church is mix of Portuguese and German architecture styles, with attractive sculptures on the walls.