Our lady of Dolours Basilica, Trichur 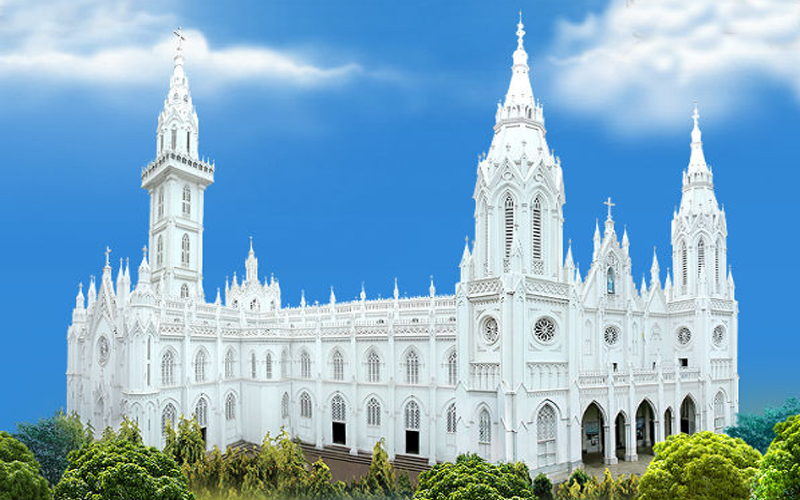 Our lady of Dolours Basilica, Trichur

Basilica of Our Lady of Dolours

On 10th October, 1925, His Ex. Bishop Vazhappilly Mar Francis blessed and offered Holy Mass on the altar built temporarily in the School hall which stood in front of the present church. He named the Church as the church of Lady of Dolours and Proclaimed St. Theresa of Infant Jesus (Little flower) as the Co-patroness. As the small temporary church was not spacious enough for the convenience of the believers, they tried to build a church conforming fully to their needs and grandeur of the town. His Ex Bishop Mar. Francis Vazhapilly visited Rome and European countries keenly observing the architecture of the churches there. The present church, known as the largest in Asia was built on the plan he drew on his return from abroad. On 21st December, 1929, His Ex. Bishop Mar Francis Vazhappilly laid the foundation of the colossal church. It took eleven years under the supervision of the famous Engineer Jnanaprakasam and the superintendent Ambros to almost complete the construction of the new church. On 18th September 1935 Sri. Ramavarma Thampuran, the Maharaja of Cochin, saw in person, the Progress in the building of the Church, and donated all the teak wood needed for building it. On 24th November, 1940 His Ex. Bishop Mar Francis Vazhappilly consecrated the Church. It was then under the jurisdiction of the Lourdes Cathedral Church. Considering the need of the time, Mar joseph Kundukulam constituted this famous shrine also as a parish on 17th September, 1978. It was made the headquarters of a forane division on August 1980.

The historic visit of Pope John Paul II to Trichur on 7th February 1986 was within the environs of this parish. In commemoration of the centenary of the diocese of Trichur, His Eminence Simon D. Cardinal Lourdu Swami, head of the Congregation of the Oriental churches in Rome, inaugurated the Perpetual Adoration Center in this Church. On 25th April 1992, His Holiness, Pope John Paul II issued a decree, elevating the church of Our Lady of Dolours to the status of a "Minor Basilica". 20th May 1992, was a monumental day in the history of this Church. His Eminence Cardinal Antony Padiyara consecrated the Church as a Basilica. There after the Church has come to be called "Basilica of Our Lady of Dolours".