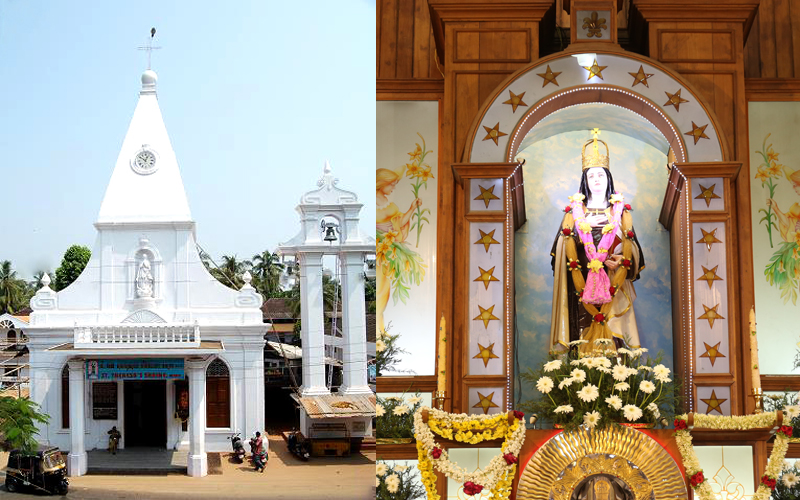 St. Teresa's Shrine, Mahe is one of the most visited shrines in India.The Shrine is located in Mahe, in the State and Union Territory of Puducherry which shares its boundaries with the State of Kerala.

According to a record which was discovered in the Carmelite Archives at Rome titled "De Missione Mahinensi in Malabaribus Commentarius" by Reverend Father Ignatius A.S Hippolytes O.C.D (dated 2 July 1757) the Shrine at Mahe was erected in 1736. According to the same document an Italian Reverend Father Dominic of St. John of the Cross came to Mahe and established the Mahe Mission in 1723 during the reign of King Bayanor, the Raja of Kadathanad near Vatakara. A small community of Christians gradually grew up at this place and in December 1736 the shrine was dedicated to this reformer Reverend Father Dominic of St. John of the Cross according to the solemn ritual of the Roman Catholic Church. Before becoming an established place of worship in 1736 the Shrine was constructed with thatches which were later modified several times.

The Carmelite Missionaries helped in the early and later formation of the church and the spiritual growth of the people of the place. More than 2000 adults, excluding children were baptized and received into the Church by them. However, in 1736 the Shrine is believed to have suffered some damage due to the wars between the French and the British. In March 1779 the shrine was damaged a greater extent or perhaps destroyed. But according to a government record about 1788 Abbe Duchenin renovated the shrine and gave it the form in which it is seen today. Afterwards the tower of the church was renovated in 1855 and a clock on the tower presented by the French Marines was fixed in the same year. In 1956 the shrine was once again renovated and was also electrified. During the subsequent years Avila Pilgrim Centre, Avila Bhavan (Sisters of Charity), St Teresa's Nursery and Primary School, Parish Hall and a New Presbytery were constructed. Many modifications to the Shrine was followed and major renovation of the Shrine was done in 2010.

Regarding the origin of the statue of St. Teresa there are two prominent beliefs. One is that this miraculous statue was carried in a ship along the West Coast and the ship was stopped at present Mahe and did not move afterward, whereupon the crew understood that it was the will of St. Teresa of Avila that this particular statue was to be enshrined at Mahe. The other tradition has it that this miraculous statue was caught in a fisherman's net in the sea near Mahe.