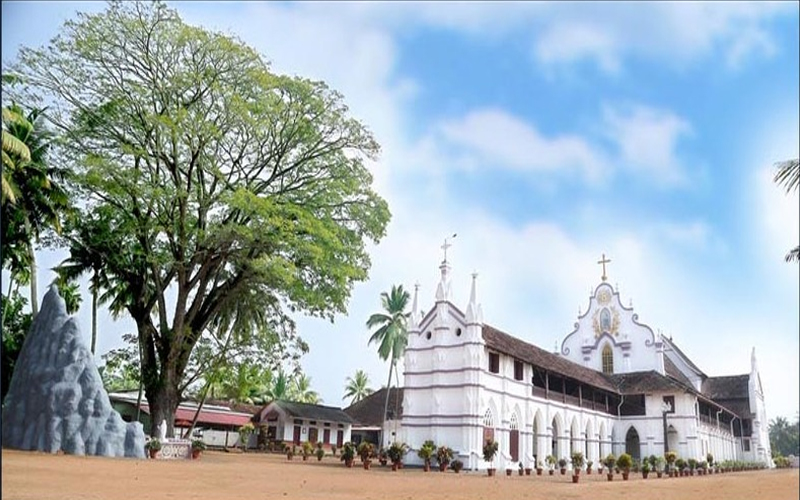 Champakulam Kalloorkad Church is the first one under the church at Niranam which is believed to have been founded by St.Thomas,the Apostle himself. Other churches founded by the Apostle were at Palayoor,Kodungalloor (Cranganoor),Kottakkavu, Kokkamangalam,Kollam and Chayal(Nilackal).The churches at Mylakkombu,Kaduthuruthy,Aruvithura and Kuravilangad took their origin by end of the fourth century AD while the churches at Champakulam (Kalloorkad),Udayamperoor and Edappally were founded during the early years of the fifth century AD.Considering the time of founding ,Champakulam Kalloorkkad Church is one among the second generation of churches in kerala. It is very popularly believed that church at Kalloorkad was consecrated on 28th December on the Feast of Holy Innocents in 427 AD. Several renovation works had been carried out since the inception of the Church.The inscription on the pedestal of Granite Cross ath the south court.yard shows that there had been a renovation in 1151 AD.though it is said that in 1720 AD the Chempakassery ruler took the initiative and gave all cooperation and full encouragement for the reconstruction of the church,no concrete evidence is availables in this regard . One thing is certain that as the Christian families within the parish proliferated and faithful increased in the number ,the need for a larger church might have become a necessity .Around the year 1720 AD the general body of the members of the parish appears to have arrived at he the decision. They might have received immense help ,instructions and pieces of advice from the Chempakassery ruler.On the plot reclaimed from the land under water out of the sheer generosity of the Chempakassery King the works of the church began in 1720 and completed in 1730. In this regard it is but reasonable to accept the inscription on the grider (Sheelanti) donated by Thamalloor ittykkuruvila Kthanar (Rev.Fr.Ittykkuruvilla Thamalloor)

The root of the Madbaha is comparatively more conical.The Madbaha is separated with a veil from the rest of the church.The church wall close to the principal altar is fully covered with wooden structures,the Rathal,which has niches to place statues.Ther are six niches in two rows of three each. The Rathal from the principal altar upwards has statues of the apostles St.Peter and St.Paul with the Sacred Heart of Jesus in the middle in the upper niches and two angels on either side at the extreme end.The statues of St.Joseph on the left ,St.Sebastian on the right and a full length one of Pushparosa matha (St.Mary carrying a rose in her hand )