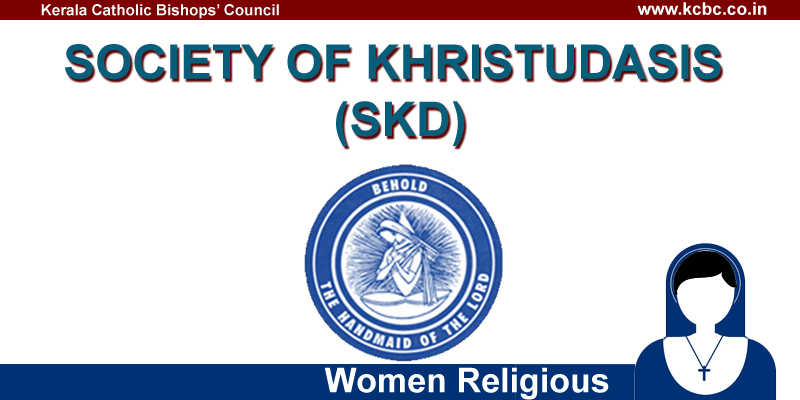 The Society of Kristudasis (Handmaids of Christ) is founded by His Grace, Emaritus Archbishop Mar Jacob Thoomkuzhy in 1977, the then Bishop of the Diocese of Mananthavady. It was a response to the pressing pastoral and missionary needs of the Diocese of Mananthavady that came into existence on 1st March 1973. Rt. Rev. Dr. Jacob Thoomkuzhy was appointed as the first Bishop of the Diocese. He took upon himself all the travails until Christ be formed (Gal 4: 9) in the lives of the people of God entrusted to his pastoral care.

The Diocese of Mananthavady was erected for the migrated people from the central Kerala. As the people continued to migrate, the Diocese felt the need to have a group of dedicated women who will be directly at the service of the people in local parish communities. This idea was expressed by many people especially the priests. Convinced of this need and discerning the will of God in the voice of so many people and encouraged and confirmed by the then pastoral Council of the Diocese, Mar Jacob Thoomkuzhy, Bishop of the Diocese of Mananthavady started the Kristudasi Society as pious association on 19 May, 1977.

The visualized plan was realized on the day of Ascension of Our Lord Jesus on 19 May 1977 when the first batch of 18 candidates reached Seminary Villa, Nedumpoil which is the cradle of Kristudasis. In the same year on 1 November, all Saints Day, the Pious Association was given the name Kristudasikal (Handmaids of Christ) with its titular feast as the Annunciation of Bl. Virgin Mary and her response, Behold the handmaid of the Lord (Lk 1: 38), as our motto. May I, 1981, the day when 15 of the first batch made their First Profession, is specially remembered gratefully.

As per the order of the Apostolic See, His Excellency Mar Jacob Thoomkuzhy elevated the Pious Association to the status of Society of women living after the manner religious in accordance with Canons of the Motu Proprio Postquam Apostolicis Litteris. This decree came into effect on 8th September 1986, on the feast of the Nativity of our Blessed Mother.

The SKD is a community of sisters who are called upon to humble service in the pastoral, liturgical, catechetical, spiritual and social lives of the people of God. The special aspect of the SKD is that it was originated in the heart of the local Church, founded as such by the local hierarch, nourished and patronized by the same and its existence is extended for the needs and requirements of the Church and the people of God.

Considering its growth and varied apostolic activities and the increasing possibility of rendering apostolic services in different Dioceses in and outside India and the need for better co-ordination and more effective organization of our pastoral activities, His Beatitude Late Varkey Cardinal Vithayathil, the Major Archbishop of Syro-Malabar Church has elevated the Society of Kristudasis into Major Archiepiscopal Status on 25th March 2006.

In these past 37 years the Society has been blessed with flourishing vocations and at present, there are 304 professed sisters and 41 candidates in different stages of formation. At present the SKD sisters are engaged in apostolate like pastoral activities, faith formation, education, health care, social service and caring for the poor and the destitute especially women and children, according to the needs of the Church and of the people irrespective of caste, creed and religion. The SKD has established three regions for administrative purposes: St. Marys Region Thrissur, St. Josephs Region Thalassery and Mary Matha Region Mananthavady. St. Marys Region has two mission stations in the diocese of Ramanathapuram, and St. Josephs Region has two mission stations in the diocese of Mandya and there are two mission stations under Generalate: one in the Archdiocese of Bangalore and another one in the diocese of Miao. Besides, we have 27 sisters working outside India, i. e., Germany and Italy. We are happy to say that through 66 convents, 304 sisters are dedicated to proclaim the Good News of Our Lord by working in 10 Dioceses in and outside India.

With immense joy and deep gratitude we acknowledge the work of the Holy Spirit throughout these past years. Praise be to the God the Father of our Lord Jesus Christ from Him and through Him and for Him all things exist; to Him be glory forever, Amen (Rom 11: 36).