CONGREGATION OF THE MOTHER OF CARMEL (CMC) 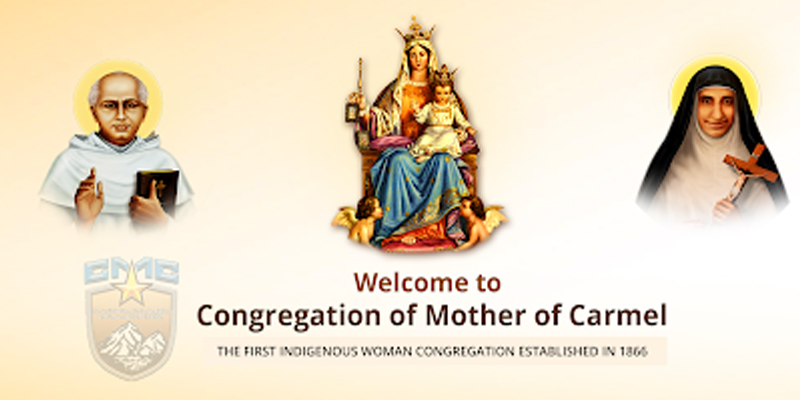 History of the Congregation of the Mother of Carmel (CMC)

The Congregation of the Mother of Carmel (CMC) which is the first indigenous Congregation for women in the Kerala Catholic Syrian Church in India was founded on 13th February 1866 at Koonamavu, Kerala by Saint Kuriakose Elias Chavara and the Co-Founder Rev. Fr. Leopold Beccaro OCD. The vision of the founders about the Congregation was the personal sanctification of the members and the salvific upliftment of the fellow beings especially women and children.

Earlier the Congregation was known as the Third order of the Carmelite Discalced (TOCD). The Congregation which started with four sisters in a bamboo hut was blessed by many young girls from Syrian and Latin rites who embraced religious life and their number increased rapidly.

In 1887 the Syrian Catholic Church in Kerala was separated from the Latin hierarchy through the Decree of ‘Quod iam pridem’ by Pope LeoXII. Followed by the ecclesiastical situation in Kerala the Congregation too branched into two i.e., the Syrian and Latin in 1890. As new Vicariates and Dioceses were formed in Syrian Catholic  Church, the Syrian section of the Congregation was divided into three independent units, later five, each of which was directed and patronized by the local ordinary of the respective Dioceses. Under the leadership of local Bishops, the Congregation along with the Syrian Church grew fast. All these independent Units i.e., Ernakulam, Changanacherry, Thrissur, Pala and Kothamangalam were amalgamated under one Superior General on 16th November 1963. Aluva was chosen as the Head Quarters and the Curia Generalate was established at Thaikkattukara. On 2nd March 1967 the Congregation was raised to the Pontifical Status under the title of ‘The Congregation of the Mother of Carmel’ through the Decree Prot.No.504/57.

Raised to the Pontifical Status and led by one Superior General, CMC began to flourish in Kerala acquiring the Global Vision to widen its fields of activities.

We are very happy to say that CMC Sisters from Ernakulum launched into mission activities in Punjab in 1958, to reach out the border areas of India- hills, valleys and planes of the country and later beyond the sea in 1978. Meanwhile the Congregation had a miraculous growth, expansion and new ventures. There were notable increases in the number of members, houses and other institutions in Kerala.

Global Presence of the CMC: The Abode of Virtue for the girls of Malabar, which had its beginning in Koonammavu,(CMC) with four members, Mother Eliswa, Sr. Anna, Sr. Thresia and Sr. Clara,  has grown into a full-fledged congregation. At present CMC is spread out in five continents: Asia, Africa, Northern America, Canada and Europe, in 24 Provinces and 4 Regions, with a total number of 6123perpetually professed and 347 temporarily professed members  along with 289 formees in different stages. What makes it unique is the presence of indigenous vocations from different states of India and also from other continents such as Africa and America.

The Sisters are involved in various apostolates considering the needs of the Church i.e., Faith Formation, Education, Healing Ministry and other Welfare Programmes under Social Work Department. CMC has her own Publications of Books and Magazines which is benefitted for the families, women and children. She has You Tube channel and produce various programmes. Home Mission, Christeen Programmes, City Evangelization, Care for the migrants, bringing up the people in remote areas, Vocational Training Centres, rehabilitation centres for the differently challenged, mental patients and Platform children, HIV& Aids Care Centers, Counselling Centers and various programms for the welfare of women, are the new ventures of CMC in the Mission of Proclamation of the Good News. We thank God for our five Retreat Centres - Carmel Mount Chethipuzha; Tabore Pala, St. Euphrasia Retreat Centre Thrissur, Vimal Jyothi Renewal center Ernakulam and Sanjo Bhavan Ramalloor. Thus the ‘Abode of Holiness’ which started for girls at Koonammava extending beyond the limits of time and place has reached the ends of the earth with the Good News of salvation.

The Cloistered Convent: The most cherished dream of the first Mother General of CMC, Mother Mary Celine has been realized through the establishment of the first cloistered convent of CMC, Sanjo, Karukutty, Kerala, India.

Saints: Fr. Kuriakos Elias Chavara, the founder of the Congregation and Sr. Euphrasia CMC were canonised as saints by Pope Francis on 23 November 2014.