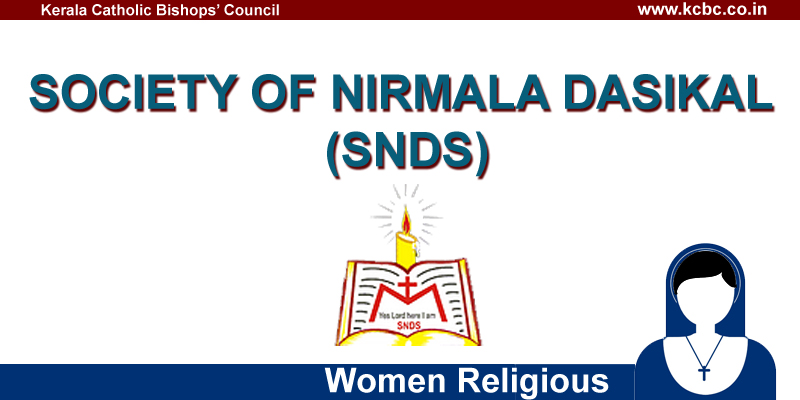 Beginning of the Nirmala Dasi Society​

St. Christina’s Home at Pullazhy, founded in 1967, is the cradle of the Society of Nirmala Dasi Sisters. This institute was meant for unwed mothers and their children as well as the orphan children obtained from the streets. At its initial stage, this institute was taken care of by the CMC sisters. Fr. Joseph Kundukulam and Fr. Joseph Vilangadan were its directors successively.

When the number of the inmates of St. Christina’s Home increased, a few young girls, inspired by God, came forward to render service in the institute. Of these, some were meant to be sent for missionary work at various places, and others for taking care of the inmates of the institute. The former was called missionaries and the latter volunteers. The girls of the second group, who could not join the existing religious congregations, were continuously requesting Fr. Kundukulam so that they be made religious sisters. They used to repeat their request even after Fr. Kundukulam was made the Bishop.

In the meantime, the CMC sisters wanted to be relieved of their charge of St. Christina’s Home. This was an occasion for Bishop Kundukulam and Msgr. Vilangadan to think of starting a community exclusively meant and trained for serving the mothers and children of the St. Christina’s Home. The ardent love of Bishop Kundukulam for the sick, poor, and abandoned as well as the familiarity of Msgr. Vilangadan with many religious congregations of a similar charism in different parts of the world and his knowledge of the Canon Law stood them in great stead in carrying out their new dream and desire. They spent many days in prayer seeking God’s light, consulting with each other, and studying the activities and charism of the religious communities devoted to the service and care of the abandoned.

Gradually they became convinced that the new consecrated community to be founded should have the following traits: It should be in the name of Mother Mary Immaculate; its members should devote themselves to a life of consecration, evangelical counsels, prayer, and community life; their apostolic services should be oriented totally to the service of the poor, abandoned, sick, supportless women, aged and bed-ridden, differently-abled children, HIV patients, etc.  The members of the community should lead a life of poverty, simplicity, and hard work. They should practice total renunciation for the sake of Christ and his Gospel.

After the initial formation, that constituted of Aspirancy, Postulancy and Novitiate14 sisters made their first profession before Bishop Joseph Kundukulam on December 8, 1973. After the profession, the members of the first batch began their service at St. Christina's home Pullazhi.

Faithfully following the instructions and guidance of bishop Kundukulam and Msgr. Vilangadan practiced a lifestyle in which the greatest importance was assigned to union with God through prayer (both personal and in the community), sisterly charity and co-operation in the community, ordered and disciplined way of living, and dedicated service of the women and children committed to their care. They insisted very much on a life of holiness, obedience, poverty, simplicity, and hard work. They really enjoyed their life of consecration and renunciation of the world and regarded God alone as their true treasure here on earth. By their selfless service, they made themselves sisters loving and being loved by all those whom they served. They thanked God for their religious vocation and lived with gratitude towards their community, without any complaint or dissatisfaction. They felt that they were abundantly repaid by God for all the losses and sacrifices they had welcomed for the sake of Jesus and his Gospel. The community grew in the favor of God and the people; they presented themselves as a community of loving communion with God in prayer, with the people in service, with the poor in total sharing of their personnel and resources, and with their own sisters with genuine love and co-operation. The first community created such a good impression among the people that other dioceses also began to ask for their service within a very short span of time.