Congregation of the Holy Family (CHF) 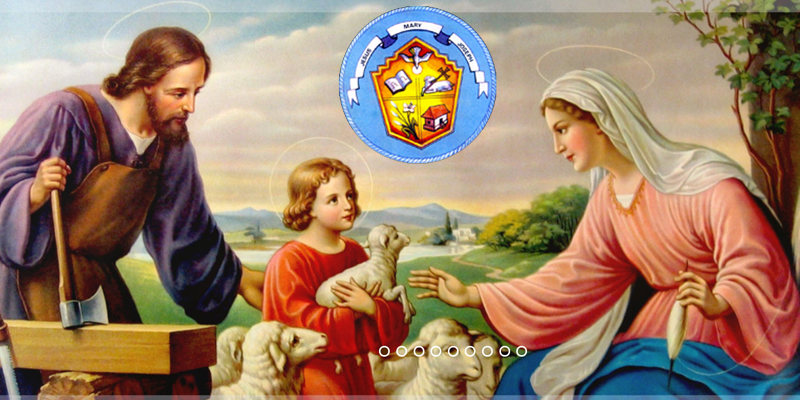 Congregation of the Holy Family (CHF) was founded by Saint Mariam Thresia, in a remote village called Puthenchira in Thrissur Dt; Kerala, in the year 1914 with the determination of imparting Christian values to the families. This indigenous Congregation was raised to status of Pontifical right of the Syro-Malabar Church on 1 August, 1978. At present Saint Thresia, known as the patrons of families was convinced that the world could be saved only through families. As a prophetess hastened to the families with fire of compassion love in her heart to bring them back to the union of God. On 8 June 1926 the saintly soul left her earthly sojourn to receive the eternal reward. Venerable Fr. Joseph Vithayathil was her spiritual Father throughout her spiritual journey. He is the co founder of the CHF. On the same date June 8, 1964 Fr. Joseph Vithayathil passed away. On 28 June, 1999 Mother Mariam Thresia was called Venerable and in 9 April, 2000 she was beatified. She was canonized on 13 October, 2019 by Pope Francis.

The First World War of 1914 -1919 created much havoc and destruction in the entire world. It rocked the Western domination in the domains of politics and religion, and raised great challenges to the European sovereignty over the world. Cruelty and injustice became the order of the day. Family life which was based on love, freedom and communion became very insecure and servile. People were suffering from poverty and sickness. The agony of the world population grieved the Holy Father, Pope Pius X, and he wrote to the Catholics of the world, “The storm of a dreadful war has torn the whole of Europe. One cannot reckon its wreck and ruin, without grief and tears. We request all of you to take refuge before the throne of the Blessed Sacrament”. Following his demise on 20 August, 1914 the new pope, Benedict XV, ascended the papal throne on 3 September, 1914.

The Indians who had long been under the colonial power had kept alive an irrepressive  desire for freedom. They expected that if they helped the British in the war, they would be granted freedom in return  and they participated in the war.

The threat and the poisonous storm of the war struck Kerala too. The mutual attacks, disunity and the internal problems of the local kings ruined the peace of the families and the society. Mariam Thresia and her companions responded to the signs of the time. Inspired by God, they spent their day time, nursing the sick and consoling those who suffer. Mariam Thresia spent long hours at night in prayer before the Crucified Lord in reparation for the sins of the world.

Foundation of the CHF

Mar John Menachery, the Vicar Apostolate of Thrissur was convinced of the sanctity of Mariam Thresia and her companions. After spending much time in prayer for discernment, prolonged acid tests, as though it were a divine intervention, he made a canonical visit to the House of Solitude on 13 May, 1914.

At the end of his formal visit the bishop decided to give hierarchical recognition to the House of Solitude and make it the first convent of the new congregation. The parishioners of Puthenchira welcomed the news with great joy and made all the arrangements for the auspicious occasion.

On 14 May 1914 in the presence of Fr.Joseph Vithayathil and many other priests, some Sisters and a vast assembly of the faithful gathered in the parish church of Puthenchira, Bishop John Menachery made the official proclamation of the establishment of the Congregation of the Holy Family. The bishop himself gave her the habit of the new congregation and Mariam Thresia pronounced before him the three perpetual vows of poverty, chastity and obedience. The bishop sanctioned her name Sr. Mariam Thresia of Our Lady of the Assumption. At this time Sr. Mariam Thresia had a vision of the Holy Family and she conversed with them. On the same day her three companions Mariam, Kochumariam and Thanda received their veils as Postulants with the names Sr. Veronica, Sr. Agnes and Sr. Clara respectively. The bishop appointed Sr. Mariam Thresia the Superior of the new Congregation and Fr. Joseph Vithayathil its chaplain. It is rare that the foundation of a new congregation and the perpetual profession of its foundress occur on the same day.

First Constitution of the Congregation

The bishop made arrangements to get a copy of the constitution of the Holy Family Sisters of Jaffna, Ceylon through the bishop of Jaffna and had it translated from Tamil into Malayalam. He gave it to Saint Mariam Thresia and her community after making appropriate changes. It was entitled “The Congregation of the Holy Family and its Rules”. He send the approval letter of the constitution on 22 July, 1914. Mariam Thresia and the members of her congregation loved the constitution with the recognition and blessing of the bishop very much and tried to adhere to it.

Vision               : To imbibe the compassionate love of Jesus crucified through  Contemplation and Meditation of the Word of God

Mission            : To impart the compassionate love of Jesus to all especially to Families and to bring them to the fellowship of the Trinitarian Family

Charism:          : The charism of the CHF is, compassionate love emanating from deep union with the Crucified Lord and liberative mission accomplished through family apostolate in the spirit of the Holy Family of Nazareth.

CHF identity is to live deep communion with God through contemplative prayer and meditation of the Word of God and to imbibe the spirit of the Holy Family and fraternal love, thus to be deeply committed for families and the destitute.

Identifying with the crucified Jesus, experiencing the beatitude of the cross, offering ourselves as a living sacrifice acceptable to God and sharing the compassionate love to all, CHF Sisters should be immersed in the Trinitarian Communion.

Therefore in all our deliberations, decisions and actions we commit ourselves to accept only that which lead us to perfect communion with the crucified Lord, to the spirit of Holy Family and to fraternal love, and to reject all that lead us away from our goal and to lead alife of penance and asceticism.

Spirituality of the Foundress, Co-founder & the Congregation

St. Mariam Thresia is a renowned mystic and the first Stigmatist of the church in India. Deep rooted faith in God’s providence, submissiveness to the Will of God and passionate love for the crucified Lord are some of the prominent virtues in Thresia. She fervently prayed, “Let God’s will and my will be one and the same”. Her intense desire to identify herself with the Suffering Lord was culminated in receiving the five wounds of our Lord (stigmata) on her permanently in 1909. She encountered Christ in the suffering and hastened to wipe out their tears, brushing aside all oppositions, prevailing customs and conventions. She accepted both physical and mental sufferings as special gifts from God. She heroically took up the challenges of reaching out to the families to save souls for Christ. She is known as the ‘Patroness of Families’ and the pioneer of ‘Family apostolate’. Her spirituality took flesh in her acts of Family Apostolate.

Venerable Fr. Joseph Vithayathil (1864-1964) was a diocesan priest, Spiritual Father of St Mariam Thresia and Co-founder of the Congregation of the Holy Family. His prayer life, deep faith and trust in God, wisdom and prudence empowered him to discern the working of the Holy Spirit in the life of Mariam Thresia. He was a man whose life was immersed in the Eucharistic love of Christ. He was a lover of the Triune God. His Eucharistic love, compassion for the poor and needy, sense of justice for the workers, love for the wayward and attentiveness to convert the sinners made him a true shepherd who had the smell of the sheep.

The Congregation strives to live ‘Mariam Thresian spirituality’. This is rooted in the gospel and based on three mysteries - the Holy Family of Nazareth; the passion of the Lord; the Eucharistic Lord. We imbibe the spirit of obedience from the life of Jesus, Mary and Joseph, our patrons. We absorb the love and readiness to suffer for the salvation of souls from the passion of the Lord and try to live the self-emptying nature of the Eucharistic Lord. The characteristic features of our spirituality are as follows: total obedience, self-emptying, humility, love for suffering and penance and fraternal love.

“Love one another and help one another” are the last words of St. Mariam Thresia, our Mother Foundress. It takes flesh in CHF Sisters by living a life of fraternal love and communion in our communities. Our committed life is centered on evangelical counsels, prayer life and community life. Our apostolates are the expressions of our commitment to God and the life of extending compassionate love towards families. Our aim is to make families like Holy Family. We derive strength and seek to follow the Mariam Thresia Spirituality.