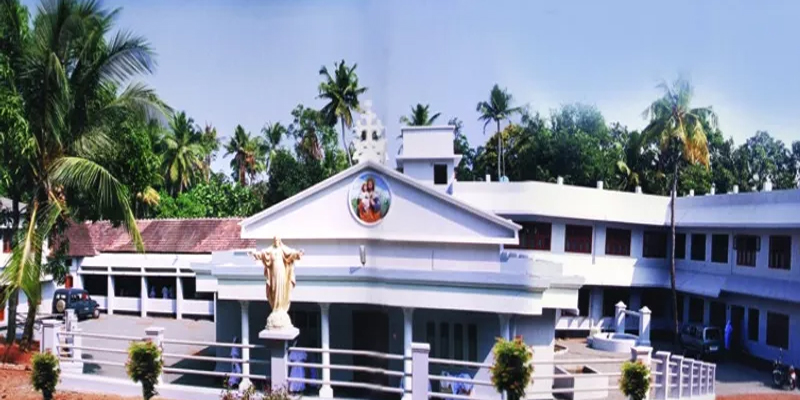 Very Rev. Fr. Cyriac Kottayarukil formed a Pious Community with the permission of His Grace Mar Mathew Kavukattu, the Arch Bishop of Changanacherry. Mar Mathew Kavukattu laid down the foundation stone for the Mother House on 15th January, 1952. Mr. Joseph Chacko Thuruthumalil sponsored the land and other necessary materials as the Golden Jubilee Memorial of his marriage. On 25th November, 1953 His Grace Cardinal Eugène Tisserant inaugurated the mother house which is named Mandiram .Today, it is popularly known as St. Joseph Mandiram. This Pious Association was meant for the women who wanted to lead a radical Christian life following the precepts of the Gospel and who, at the same time, did not get the admission in other established religious congregation either due to lack of proper education or some other reasons. On 1978 His Grace Mar Antony Padiyara allowed this Pious candidates to enter in to the Novitiate, by seeing their life which fulfilled with prayers, sacrifice and hard work. Also they guided by the various directions in to their formation period. Also they had submitted the report of their community life to the Diocese. As a result, on 1987, the Arch bishop of Changanascherry Diocese His Grace Mar. Joseph Powathil visited these members and to made a personal talk with them. He blessed and allowed them to enter in to the Novitiate. After one year of formation on May 31th 1988 , the first 28 members and the newly 10 members received the Consecrated Dress and had done their Vowsto God in the presence of Mar Joseph Powathil . By the end, 1988 June 26 onwards Pious Community became completely free and consecrated community named as a Josephine Sisters. Josephine Sisters were under the Arch Diocese of Changanacherry, so the Arch Bishop is the patron of this religious society. He appointed a religious priest or a parish priest as the director of these sisters for the growth and spiritual welfare of the society. All the directors helped the sisters according to the time, need of the time specially in their spiritual life. We have General Election in every three years. By the grace of God Almighty, we have General Superior and 4 Councilors and a General Procurator running .The administration of the sisters is fulfilling by the guidance of director father. At present we have 10 convents in Kerala and three in abroad. Our sisters give their valuable services in differently. According to the needs of the society we formed our institutions in various places. Our Charism is “ Being the kindful love and mercy of Jesus, serve the needy ,poor, sicks and abandon in the old age, and get the soul for Jesus”. Based on this Charism we work out many parishes for Jesus. Also we helps the church through the parish activities, helping the society by establishing a English medium school in our village, also established a small hospital and an old age home in the locality. Under the Arch diocese of Changanachery we have convents in Ithithanam ( Formation house and Novitiate House), Paral parish work and small school, Chambakulam parish work, Chennamakary Parish work and Primary School, Villoonni ( Generalate, LCM Hospital, Santhibavan (Old Age Home) and St. Joseph’s School English Medium CBSE School) apart from this we works in the Bishop house. We work under the diocese of Rajamudy Parish in Thalacherry , Valiyakolly Parish in Mananthavady. Further this we works abroad in Italy under three diocese-six Parish , in Germany two places, Vienna one place. Total we have 80 sisters, two novices, 3 postulants, 3 Aspirants right now. According to the needs of our Church we are ever ready to work at any time. By the blessings and grace of the Lord Almighty, our heavenly patron St. Joseph and the blessed Mother Mary, we the Josephine Sisters lives by imitating Jesus in the Gospel