The Congregation of Teresian Carmelites (CTC) 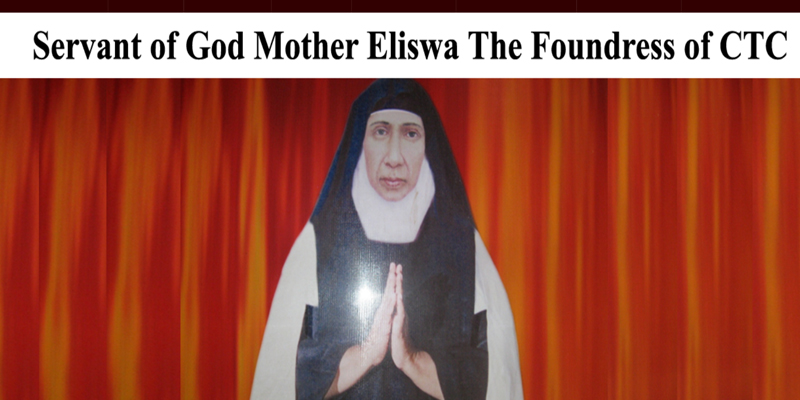 It is surprising to learn that until the second half of the19th century, there were no religious congregations for women and Catholic schools for girls in Kerala. The Servant of God Mother Eliswa was the precursor of women religious in Kerala and the founderess of the first indigenous Third Order Discalced Carmelite Congregation (TOCD) for women in India which later bifurcated to the Congregation of Teresian Carmelites (CTC) and the Congregation of the Mother of Carmel (CMC).

She established the first convent school, boarding house and orphanage for girls in Kerala and provided a value oriented and integral formation for girls and women. The members of both CMC and CTC, i.e. more than 7000 sisters, could receive the heavenly beams of prayer sacrifice and service through Servant of God Mother Eliswa Vakayil, the foundress.Mother Eliswa, the first religious sister, is the mother of all consecrated women in Kerala. Eliswa was born on 15 October 1831, to a noble Vyppissery Capithan family in Cruz Milagris Parish at Ochanthuruth, in the Vicariate of Verapoly, Kerala. She was the first of eight children born to Thomman and Thanda. Louis, her third brother, was the first to be ordained a priest for the St Pius X Province of the Discalced Carmelite Order in India. He was also the founder of the first Catholic bi-monthly, ‘Sathyanadhakahalam’. Louis was a scholar, a linguist and one of the translators of the Bible into Malayalam. He has written ten books.

In 1847 when Eliswa was 16 she married Vatharu Vakayil at Koonammavu and bore a daughter, Anna. When Vatharu fell ill and died, Eliswa refused to remarry and chose a life of prayer, detachment and solitude, received the Sacraments frequently, and spent long years in silent preparation for a life inspired by the Holy Spirit. An Italian Carmelite Missionary, Fr Leopold Beccaro OCD, revealed God’s plan to her. Eliswa’s daughter, Anna, also decided to be consecrated. Thresia, Mother Eliswa’s youngest sister also met Fr Leopold and expressed her desire to consecrate her life to God.

The then Vicar Apostolic of Verapoly, Archbishop Bernardine Baccinelli, OCD, officially signed the decree of foundation of the Third Order of the Discalced Carmelite Congregation for women (TOCD). On 13 February 1866, these three Latin-Rite women moved from their home to the newly built bamboo convent on their property. It was the first convent in Kerala and the history of the TOCD is unique in the history of the Catholic Church. Later, members of the Syro-Malabar Rite were also admitted to this Congregation by Mother Eliswa. On 27 March 1867 the sisters moved from the bamboo convent to St Teresa’s Convent at Koonammavu that had just been built on the property owned by Mother Eliswa and her daughter Anna. On 24 March 1890, the Sacred Congregation of Propaganda Fide decided to change the jurisdiction over St Teresa’s Convent at Koonammavu from the Archdiocese of Verapoly to the Vicariate of Thrissur. On 17 September 1890 all the Latin sisters, including the Foundress Mother Eliswa, had to leave the convent. They were sheltered in St. Teresa’s Convent (CSST) Ernakulam for few days after which they were brought to Varapuzha by the Archbishop of Verapoly. Today the two branches of this TOCD Congregation form two independent religious congregations: The Congregation of Teresian Carmelites (CTC) and the Congregation of the Mother of Carmel (CMC).

Mother Eliswa received eternal reward on July 18, 1913 and was buried in the special burial place in front of the St. Joseph’s and Mount Carmel Church at Varapuzha. In 1997 her mortal remains are shifted to the tomb inside the memorial building called Smruthi Mandhir in St. Joseph’s Convent at Varapuzha.