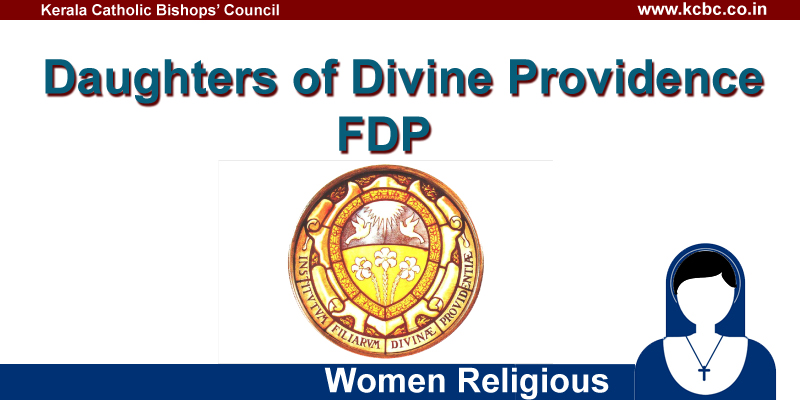 The Congregation of the “Daughters of Divine Providence” (FDP), founded in Rome, Italy, on September 8, 1832 by Venerable Mother Elena Bettini, under the inspiration of  Fr. Thomas Ludovico Manini, a Barnabite priest. It is a women religious congregation of pontifical right and apostolic in nature.

She was born on the feast of Epiphany, January 6th 1814 in Rome, Italy to  Vincent Bettini and Lucia Cardinale as the youngest among the five children. They lived in the heart of Rome, in between Piazza Venezia and Largo Arenula. The day after her birth, she was  baptized in the church of Santa Lucia alle Botteghe Oscure. She was a beautiful young girl.

It  was during the reign of Pope Pious VII just after the French war. At that time the king of Rome was Pope. On one Sunday, a down pour prevented Elena from reaching the church of Santa maria del Pianto. Not wishing to miss Eucharistic communion, she went to the church of San Carlo ai Catinari officiated by the Barnabite fathers. She went towards a confessional, unaware that the occupant was  the parish priest Fr. Thommaso Ludovico Manini, a Barnabite. From that unforeseen encounter, Young Elena Bettini`s marvellous adventure began.While hearing her confession he perceived her spiritual qualities  and the availability of Bettini.

Father Manini was born in Reggio Emilia on May 7, 1803.  At the age of 19 he asked to be admitted into the congregation  of the Regular clergy of St. Paul; the following year he solemnly professed his religious vows in the family of the Barnabites. He was appointed as the parish priest of San Carlo ai Catinari in July 1829. Highly educated and zealous, Father Manini was keenly aware of the need for an intelligent and resolving initiative of a religious congregation. The meeting of Father Manini  with Elena was like a bolt of lightning.

Founding the congregation of “Daughters of Divine Providence”

At the providential meeting, Fr. Manini, being an expert  spiritual director, noticed in Elena the transparency and inner freedom; he recognised the signs of God`s passage in her life and felt a new hope growing in Him. Although very young and inexperienced, Elena Bettini shared his same passion for education; she had a dream in her heart and would soon realize that there was someone waiting for her. Fr. Thomas Manini found two other pious young women willing to share his ideal; Violante Parigiani born in Poggio Mirtetto in Sabina and Luisa Migliacci, born in Rome.

Everything happened so quickly; He took permission from Cardinal Placido Zurla, the vicar of Pope Gregory XVI for the diocese of Rome and religious superiors.  He drafted an outline of regulations for the three candidates. He rented a modest apartment in via dei Falegnami, very close to the church of San carlo ai catinari.

On the afternoon of Saturday, 8th September 1832 the day of the Nativity of the blessed Virgin Mary, the three young women received from the hands of Father Manini the religious habit. Elena with two other young girls began their mission at the service of the least and needy. They reached in compassion and love especially to the children of their time reduced to misery by the French war. Maria Elena Bettini with her companions removed these children from the streets of Rome beginning a school and giving them proper education with the help of Fr. Tommaso Manini.

Soon they began to grow in number and obedient to the Divine Master’s command “… go and make disciples of all nations”, the small community began to go far and wide and under the provident care of the Father, the Daughters of Divine providence have spread first around Rome, then to the other parts of Italy and slowly to the other countries.