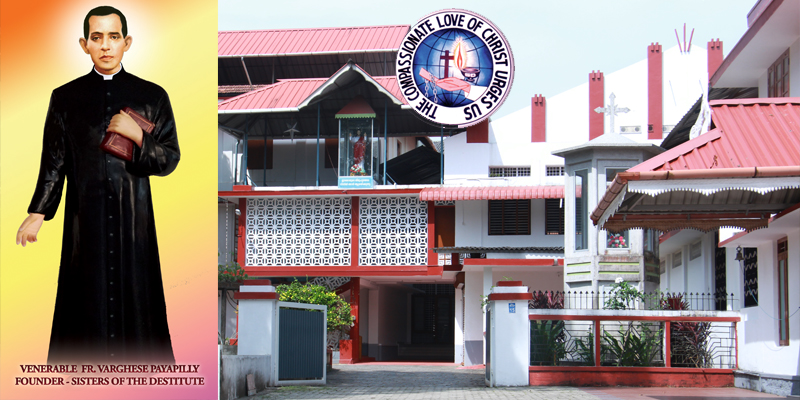 A brief history of the Congregation

The congregation of the Sisters of the Destitute  was born on 19th March 1927 according to the infinite plan and providence of   God.

Until the 19th century there was no organized from of charitable services in Kerala to care for the poor and the destitute, aged and infirm, unwanted and downtrodden fellow men abandoned in the streets or uncared for at home. Deeply moved by Jesus’ words”…as you did it to one of the least of these my brethren, you did it to me”  ( Mt.25:40) Rev. Fr. Varghese Payapilly a zealous and devoted priest from Ernakulam diocese came forward with the idea of founding a congregation to continue Christ’s redemptive mission among the poor. Through a providential coincidence, five ladies  from Kizhakkambalam approached His Grace Mar Augustine Kandathil, the late Archbishop of Ernakulam, with the desire of leading religious life in a new congregation serving the poor and the destitute. With these young ladies as pioneers the congregation was founded on St. Joseph’s Mount at Chunangamvely,  Aluva, Kerala, India on  19th March 1927. It was originally named “Little Sisters of the Poor”. But in 1933, it was changed into ‘Sisters of the Destitute’, since there was another congregation having the same title.

Our Founder father himself trained the pioneer sisters to make home visit in the locality and also give care and shelter to the abandoned, destitute, in the same small house where they started the first community. This was the first field of apostolate of S.D., urged by the compassionate love.

Just after two years at its infancy itself, our beloved founder Fr. Varghese Payapilly was called to his eternal reward on October 5th 1929 and Msgr. George Valliarumpeth was appointed as director and the congregation continued to grow and flourish under his able guidance and untiring efforts. S.D took a radical step and made her first missionary journey and reached Delhi in 1958 and Euorope in 1964. It was a great privilege to have the training and guidance of Msgr. George Valliarumpeth   for a span of 41 years until 1970 when he expired.

We were blessed with three provinces namely St. Mary’s, St. Vincent and St. Joseph in 1985. The congregation was exalted to Pontifical Status on 22nd May 1989. The three mission provinces namely Santhidham, Pushpadham and Krupadham were the three gifts of the great Jubilee of the year 2000.

At present S.D is spread out in India and abroad having Six Provinces with a total number of 239 houses and 1448  Sisters working in 52 Dioceses in India  and 18 dioceses in abroad. Being faithful to the founding charism we are urged to bear witness to the merciful love of Christ in this wounded world through the following ministries. :-

S.D has a memorable history of 94 years of Grace. We recall the mercy of God and generosity of the kind hearted people in our journey.