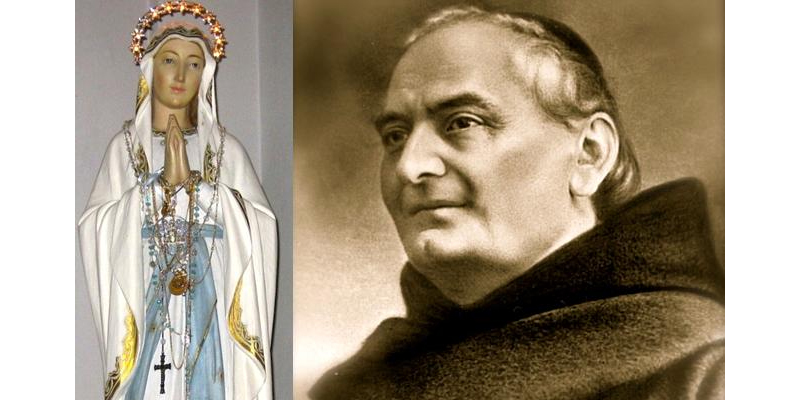 Fr. Agostino of the Order of Friars Minor, an eloquent and influential preacher moved by Franciscan spirituality, was the one chosen by God to dedicate himself for a particular mission. At the time of Fr. Agostino, the orphans in general were a neglected lot and as such were being misused and even abused by society. This sad and sorry state the society subjected them to so broke his heart that he decided to become a loving Father to them.

This is what he found as his mission among the orphans - to convince them that they are wanted, cared and loved and equally on them as well rests the bright future of the society. Fr. Agostino had enough light to see that himself alone could not undertake such a herculian task and so he sought the help of those willing and ready to offer their life in the service of such deserted, distressed and hence, downtrodden.

On 5thAugust 1893, twelve young ladies came forward to face this challenging vocation and that led to the birth of the 'Congregation of the Daughters of Nazareth'. To provide the basic needs and care to orphans, Fr. Agostino founded two Homes, one at Pisa and the other at Marina di Pisa. Many were sceptical about this new movement and even doubted its survival. On 3rd September, 1896, Archbishop of Pisa, His Grace Rt. Rev. Ferdinando Capponi declared the pious association, Congregation of the Daughters of Nazareth as a canonical entity.

The Congregation focuses its attention mainly on the formation of the orphans by rendering assistance and providing education and thus enabling them to lead a decent, dignified and meaningful life like all the other children of God. As the Congregation branched its mission to a wide range of services, the members of the Congregation increased. So Fr. Agostino felt it necessary to formulate rules for the Community.

Basing on the values of simplicity and care he formulated the rules because he was particular that the Houses established under the Congregation should have the same shade of simplicity and care as exemplified in the Holy Family of Nazareth. In 1936 the codified canons were approved by Archbishop Vettori and consequently in 1984 the Holy See approved the Congregation and its rules and regulations.

Along with the assistance to the orphans, the Congregation now has extended its field to the apostolate of assisting the sick in bed, conducting special schools for the deaf and dumb. Thus the Order focusses its attention on that segment of the society that is usually ignored, neglected and shunned. The Congregation has spread to different parts of the world and has now come to India. In the Diocese, we have a House established on 16th May 1981 at Mundamvely.

The narration thus far serves but a sketchy summary about the Congregation. For a bit more on how a sapling of the same came to be planted here, we have to browse on the Bishop's personal notes. As they show, the vocation crisis in Italy which necessitated search elsewhere, opened new horizons for the Daughters of Nazareth. On the advice of a Superior General of another Congregation, Rev. Mother Carla Ceroni conveyed the impact of the crisis to Rev. Fr. Reginaldo Bernini, a Dominican priest and sought his advice and help.

Rev. Mother General, Daniela Sabbatino, of the Congregation of the Servites of Mary in Pisa, Italy, had many Indian Sisters, novices and aspirants from Kerala and had already had a convent at Perumpadappu in the Diocese of Cochin. Quite so, more and more candidates joined the Congregation from the area. Rev. Mother Carla Ceroni, the Superior General of the Sisters of Padre Agostino, whose Generalate is very close to that of the Servites of Mary, consulted Madre Daniela. She, in turn, advised Mother Carla to contact Rev. Fr. Reginaldo Bernini.

Consequently Fr. Bernini wrote to His Excellency Rt. Rev. Dr. Joseph Kureethara introducing the Daughters of Nazareth and informing that Mother General Carla Ceroni would like to pay a visit to Cochin in March 1981. His Excellency responded positively to Fr. Bernini welcoming them and then came the first letter of Rev. Madre Carla Ceroni in January 1981 requesting permission to start a convent in the Diocese.

On 21st March 1981 Mother Carla Ceroni and Sr. Benedeta landed in Cochin together with Sr. Ubaldesca with the intention of finding willing souls to join and to take them immediately to Pisa, Italy. The prelate was pleased but partially with the proposal as His Excellency could not agree with the latter objective. The Bishop allowed them to recruit girls on condition that they would be taken abroad only after a minimum of two years training and formation in India. Agreeing to the condition Sr. Benedetta stayed in Cochin and Mother Carla Ceroni returned to Italy. Sr. Benedetta started recruiting candidates and she was overjoyed when she found that she could recruit many. But the Bishop advised her to limit the number to five in the first batch.

In May 1981, His Excellency issued the order permitting them to start a House of the Daughters of Nazareth in the Diocese of Cochin. On the same day the Sisters shifted to a house at the Catholic Centre, Thoppumpady. The house was blessed and Holy Mass was celebrated there on 2nd June 1981. Madre Carla and Sr. Benedetta were taken to see a site at Mundamvely by the Bishop himself. Mother Carla Ceroni came again on 17th November 1982 and bought the property at Mundamvely to start the convent. Its foundation stone was laid on April 5, 1983 and when completed, the solemn blessing and inauguration of the Convent took place on 12th May, 1984.

A candidate named Miss Gemma Abrao from Earavely who had joined the Congregation and had been taken to Pisa to join the Novitiate had become seriously ill. She was brought back and immediately admitted to Lourdes hospital. She died there on 22nd March 1984 but the love and the careful attention the Italian Sisters had bestowed on her was itself a great edification to all. Many young people from Palluruthy came and did all they could to assist at the funeral services of the departed dear one.

The Congregation aims at the glory of God by serving the Church under the special protection of Virgin Mary. The Community welcomes and accepts into its fold people who feel called by God to dedicate themselves to charitable work and to strive together for the good of the souls and for the relief and welfare of those suffering for Our Lord and Master, Jesus Christ.

The Daughters of Nazareth endeavour for their own sanctification by faithfully observing their rules and struggling for the well-being of the body and bliss of soul and through Christian education and instruction of young generation and remaining as refuge and support to all who need their help.

The activities of the Daughters of Nazareth are education of the young, assistance to the sick and the aged. In India its activity is concentrated in the catechetical and academic field. In fact they are running a special school for the deaf and dumb and a nursery school. These activities are integrated with the various services rendered to the parish by taking catechetical classes, organizing religious associations, organizing youth and visiting homes.