The Missionary Congregation of the Daughters of St.Thomas (DST) 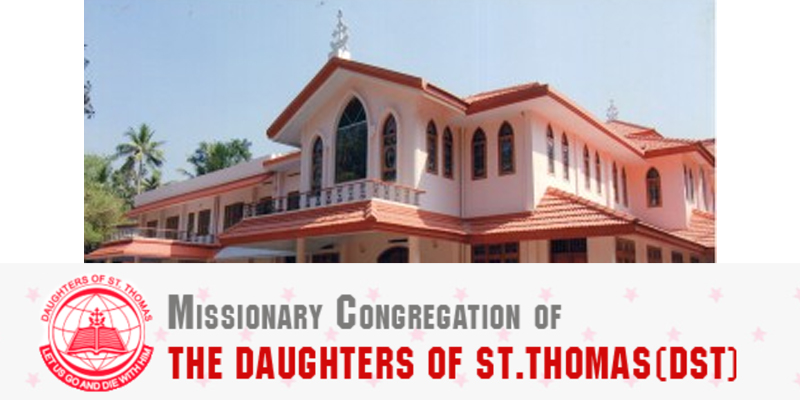 The Missionary Congregation of the Daughters of St.Thomas (DST) has got a unique goal and vision to be the heralds of the Christian faith that we have inherited from our Mother Church and witnesses of the Risen Lord. It is the first missionary congregation for women in the Syro-Malabar Church. Vatican Council expressed unequivocally the position and the rights of the Eastern Churches in the Catholic Church and re-established the privileges and customs which have been abolished in the past. (OE 1)

Inauguration of the Congregation

Imbibing the spirit of the document new Exarchates were assigned to the Syro-Malabar Church in the North Indian missions. As an outcome of the erection of the new Exarchates there arose a need for more personnel to work in these newly erected territories especially since the foreign missionaries had to leave India according to the regulations put forward.

The Diocese of Pala rich for its missionary vocations contributed her own share in this context. Bishop Mar Sebastian Vayalil who is known as the Bishop of vocations was taking very active steps in sending zealous youth from his diocese to the North Indian congregations.

In this particular situation of the Mother Church God intervened and he selected a very pious young priest of the diocese Fr.Jacob Thazhathel as an instrument in his hands. For long he was keeping in his mind an earnest desire to found a congregation for women who are so desirous but due to adverse situations are not able to fulfill their desire to embrace the religious life. He always kept a corner of his heart soft and sensitive towards the poor, the suffering and the needy. He expressed the promptings in his mind to form a congregation for women as an answer to the challenges of the signs of the times to His Excellency Mar Sebastian Vayalil. His response to the request of Fr. Jacob Thazhathel was quick and positive because it was in conformation to the inner desire he was having in his mind for long to start a missionary congregation for women in line with St. Thomas Missionary Society for Priests that he founded in Ampara in the year 1968. Thus DST is founded to direct the indigenous vocations to the mission fields.