THE DAUGHTERS OF MARY (DM) 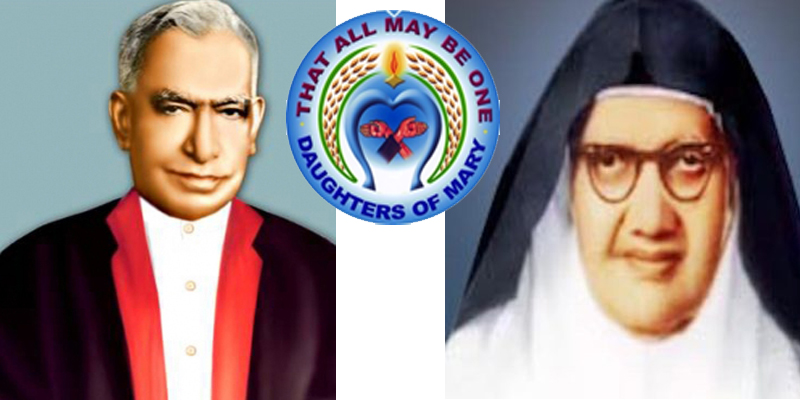 THE DAUGHTERS OF MARY

Founder:, Monsignor Joseph Kuzhinjalil, (1903-1983) The pioneer of Syro Malankara Catholic Church His Grace, the Servant of God, late Archbishop Mar-Ivanios after the historic event of the communion with the Universal Catholic Church in 1930, made an extensive appeal and sought help from the Syro- Malabar and Latin catholic churches by means of clergy and religious personnel for the spiritual benefit of the people.

As he came to Trivandraum in 1934, the Servant of God Mar Ivanios sent him to Marthandom, the southern section of the Archdiocese where there were no establishments, structure or erudite members in the society. Majority of the people in the region were Hindus, socially backward, unemployed, destitute, illiterate, ignorant, slaves of local land lords and indulged in superstitions. They frittered their limited remuneration of hard labour on black magic and devil worship believing to get protection from famine, drought, poverty and sickness.

Fr Joseph resided in a small rented mud hut in the midst of the poor inhabitants. On a rented bicycle he moved around in several villages and visited people and families, giving counselling, praying for the sick and suffering. They started to share their difficulties with him and in return Fr Joseph shared his faith experience.

Within a short span of time several hundreds of people received baptism and, spiritual centres were established in various remote villages. Administering the sacraments and faith education to the increasing number of people became impossible for him alone. He was restrained to provide effective pastoral care to female members due to the barriers of cultural and religious uninfringeable traditions. He was inspired to start a women religious congregation to assist him in the work of Lord.  Thus a missionary congregation, named DAUGHTERS OF MARY was founded on May 8, 1938 at Marthandam, Kanyakumari District, Tamil Nadu, South India.

He earned for himself the fame as the greatest missionary of the Malankara Catholic Church, a fame that no one else shares with him. On  January 27,1978 the Church, as a token of its acceptance and acknowledgement of the valuable services of Fr Joseph, raised Him into the status of Monsignor. Joseph Kuzhinjalil. At the age of 80 after offering 3 Holy Masses in different stations, finishing his daily routine and prayers he went to bed on August 22nd and he fell asleep in the Lord in the morning on August 23, 1983, due to heart failure.

Through the tiresome work of the founder father and sisters at Marthandom, the soil was made fertile even to the position of erecting Marthandom and Parasala as a dioceses of the Malankara Catholic Church. Proclamation of the word of God through various apostolates is our mission. Among the various forms and dimensions of our apostolic ministry, house visiting enjoys the prominent role. Regular visits to the families without seeing the caste and creed is an efficacious means to bring Christ’s presence to the people. Being the effective instruments in the hands of God, DM sisters involve in education ministry and healing ministry to fulfil the needs and aspirations of the people of different culture, custom and tradition. The congregation runs orphanages, old age homes, palliative care centres, and homes for mentally and physically disabled persons and children,

Today the members of the DM congregation strive to preserve and follow the charism of the founders, and to fulfil the Divine mandate to preach the word to every person, door to door through House visiting until the glorious coming of the Saviour. DM sisters are committed to live the Gospel, maintaining a life of prayer and proclaim the word of God in all the ways.

The missionary congregation, named DAUGHTERS OF MARY was founded by Msgr. Joseph Kuzhinjalil  on May 8th ,1938 at Marthandom, with the paternal blessings of the late Arch bishop Mar Ivanios and the approval of Pope Pius XI. Three zealous missionaries, two from Syro Malabar Catholic church and one from Malankara Catholic church came forward to accomplish his mission, and they were trained by the sisters of Imitation of Christ. (SIC) of the Malankara Catholic church. Mother Mary Kallarackal the co- foundress, Sr Agnes, and Sr Theresa were the founding members who initiated a dedicated life of sacrifice, prayer and evangelization among the people of South India, Kanyakumari District. They adopted the Franciscan Spirituality, practising virtues of poverty, purity, humility and simplicity. In 1939 the founders with the approval of Archbishop Mar Ivanios, adopted the rules and statutes of the Franciscan Missionary order as the Daughters of Mary's first constitution, after relevant modifications.

On 1968 July 15 the Congregation of Daughters of Mary was affiliated to the Franciscan Friar Capuchin congregation. Sisters worked tirelessly and followed a strict religious community life, to give witness to the presence, love and divine protection of God to their contemporary society, which was poor, helpless and illiterate. They established new communities in Chellamkonam in 1946, in Adoor and in Kirathoor in 1947, in Venniyoor in 1948 and many more dioceses in Tamil Nadu and Kerala for the Evangelization and for the literacy. In 1948 a new community and a health care institution were established in Anchal with the intension of Evangelization through the health ministry. Later on it has grown as a big hospital of the area. The missionaries spread around the kanyakumari and Trivandrum Districts.

In 1987 the Congregation expanded its mission to various states of India and opened the way to unwrap its mission to abroad and restructured it into two provinces. On October 15, 1988, His Holiness Pope John Paul II raised the Daughters of Mary Congregation to the Pontifical Status. During the last eight decades of long journey so many spiritual, theological and canonical experts and well-wishers guided us to accomplish the task of improving the spiritual, theological and juridical life of the congregation.

Mission and Vision: Our mission is to prepare the hearts of people to accept Jesus as the Lord and Saviour and to welcome non-Catholic brethren into the full communion.

Our mission is lived and expressed in a diversity of apostolates among the non-Christians, the marginalized, poor especially to women and children through home visits; parish and faith formation; education, health care, and social welfare activities. The vision of the Congregation is that the people of God are led to the Kingdom of God through ever greater unity and freedom, characteristic of the Children of God.

This congregation has happily grown and extended itself widely to out of Kerala and Tamil Nadu. Being impressed by the great opportunity offered for evangelization in North India, with the help of CST fathers, we extended our missionary service in North India too. The first mission in this region taken up was in  Muktsar, Punjab in 1975. In 1994 new mission station opened in Billawar at Jammu & Srinagar Diocese. In 2005 Punjab Region was raised to the status of Province and spread around the Jalandhar Diocese. In 1981 the Missionaries of the Daughters of Mary landed in Durgapur at Maharashtra and established its Mission stations in Chanda, Pune & Nagpur Dioceses. In 2016 Amala Province of Maharashtra is raised into the status of Province. Many received Christian faith in these places. Missionaries constantly visited the houses in the villages establishing Christian communities as well as schools, technical institutes and health care clinics. so that it is able to exercise its activities in all the dioceses of the Syro Malankara Catholic church, extra territorial areas outside Kerala and India also in various dioceses of the Syro Malabar Church and the Latin Church.

In 1992 Daughters of Mary set out for Germany and landed in Zweibrucken and established their missionary service through health ministry. In 1993 extended their service to Dortmund – Derne, in 1996 to Peissenberg  in 1998 to Nesslwang in 2002 to Schacht in 2005 to Augsburg – Westheim and in 2006 to Dortmund-Hukarde. In 2000 the congregation started its new mission stations in New York and spread to Greensburg in 2001, Los Angeles in 2003, Bronx in 2003, Detroit – Hazel Park and Detroit – Livonia in 2004. The mission began in Africa at Tanzania in 2011. DM sisters are serving in Italy, Germany, Africa and the United states, involved mainly with health care, pastoral and education ministry.

On 30th July 1986 a prayer house named TABOR was established at Trivandrum for spiritual oasis for the members of the Congregation. In 2008 a house of contemplation was raised named ALVERNA for those who desire to lead a contemplative life.