Franciscan Sisters of Our Lady of Victory (FSLV) 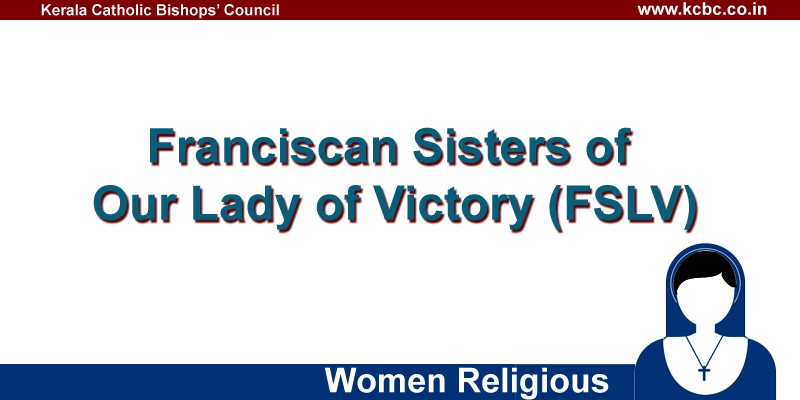 The Congregation of the Franciscan Sisters of Our Lady of Victories was founded on the Island of Madeira, Portugal, on 15th January 1884. The Foundress, Mary Jane Wilson, who later assumed the name, Sr. Mary of St. Francis, was of English nationality. She was born on 3rd October 1840 at Hurryhur in Mysore (Karnataka), India. Her parents who were English were serving the United Kingdom in India then.

They brought up their children in the Anglican faith, of which they themselves were devout followers. Her mother having died when she was just eight months old, Mary Jane Wilson was sent to England at the age of two, together with her brother. In England they were both placed in the care of an aunt who ensured that they were given an excellent education. But when Mary was eight and a half years, her father, too, died, leaving her virtually an orphan.

As a young woman, Mary was assailed by several doubts concerning her faith and these brought her close to the Catholic Church. However, certain difficulties persisted, the greatest of which was her inability to believe in the real presence of Jesus Christ in the Holy Eucharist. This was overcome, thanks to a special grace from Our Lady of Victories before whose image Mary Jane prayed fervently throughout the night of 30th April 1873. By day-break she felt herself relieved and enlightened and could entertain firm conviction on the mystery. Thus fortified by firm faith, she was conditionally baptized on 11th proximo as a Catholic at Boulogne-sur-Mer in France.

The years that followed were a time of deepening of the faith she had acquired, which she further fortified by making pilgrimages to various holy places, reading religious books and engaging in the activities of pious, charitable and apostolic religious associations. She joined the Third Order of St. Francis and made her profession on 19th March 1875. On her return to England, she studied nursing and worked as a nurse in the London Hospital. Then she began to feel the bitter estrangement by the members of her family who deeply resented her having become a Catholic.

As a nurse she first came to the Island of Madeira in 1881, accompanying an English lady who was ill. There her eyes were dazzled by the natural beauty of the scenery but her soft and sensitive heart was tormented by the disheartening spectacle of the physical degradation and moral misery in which the people of the Island pushed their days.

The land was virtually swept over by the ideologies of liberal laissez-faire. Negligence and indifference on the part of politicians were but just ways of routine life. The poor average, ordinary people were under the vicious grip of the tentacles of under-development. They had no schools and no facilities for health care and had to endure poverty, hunger and diseases. Even the clergy, who lacked both zeal and vision, failed to give themselves as an example and had not had the courage to countenance an active Christian life.

Moved by her ardent zeal, Nurse Wilson very soon began to give religious instruction, to visit the sick, bringing to them both loving care and medicinal remedies. Before long, she started a number of charitable institutions including several catechetical and basic human development centres, a dispensary, a pharmacy for the poor, an orphanage and a school. In order to keep so many activities going, she appealed for public support and was surrounded by helpers. It was with the first among these willing hands, Amelia Amaro de Sa, who was also totally dedicated to God and to fellowmen, that she started the Congregation on 15th January 1884.

In the then existing turbulent political climate, the bold move was definitely in defiance of the laws and political institutions of the time. The authorities never allowed new Congregations sprouting and at the same time sought pretexts for suppressing and abolishing those that already existed. In spite of the difficulty in securing official recognition, the Community began to grow and expand, establishing schools throughout the Island and undertaking other initiatives intended for the benefit of the deprived, the destitute and such in despair.

When the republican revolution took place in October 1910, the government ordered the suppression of all religious institutes. The Sisters, who had been reduced to the lay state, were dispersed and the Foundress, then aged 70, was arrested as an unwanted expatriate and expelled to England. An year later she managed to return and bring together some of the Sisters who had been dispersed.

They secretly renewed their vows and began to live according to the provisions of the Constitution that she had prepared while in exile for just such a clandestine existence. This form of life was approved by the Bishop of the Diocese in May 1916 but later that year, as she was getting ready to open a pre-seminary school at the request of the Bishop, Sr. Mary of St. Francis was called to her heavenly reward on 18th October, at the former Convent of S. Bernardino, in Camara de Lobos.

In spite of the many trials it endured, chiefly in the field of religious freedom, the Congregation continued to grow in God's eyes. In due course the Community spread throughout most of the Island with their multifarious activities in ever so many fields. They stepped up their good work in schools, orphanages, children's and old people's homes and hospitals, always with special emphasis on reaching out to the denied and the down-trodden besides their usual contributions in catechesis and pastoral work in the parishes.

Several of the Sisters in the Congregation had for many years longed to carry its charism to India, the native land of their foundress and had kept the wick of hope alight in their. The cold currents conveyed from the political peripheries of the two countries and the reluctance on the part of the Indian Government to permit long-term residence of foreigners stood in the way of this wish being realized. In 1991, the President of the Portuguese Republic, Dr.Mario Soares, visited India and the warmth with which he was received broke the political ice and opened the way for bilateral relations.

In 1992, Rev. Sister Maria Eneide Martins Leite, Superior General of the Franciscan Hospitaller Sisters of the Immaculate Conception, visited the Diocese of Cochin. The Superior spoke of the Sisters of Our Lady of Victory to Bishop Joseph Kureethara, who, in his warm hospitality, extended his willing hands ready to receive them. In August 1993 His Excellency had occasion to pay a visit to Portugal. The Bishop made his presence known to the Sisters of Our Lady of Victory and Sr. Ilda Rebeiro Gomes Tomas, Vicar General, and Sr. Maria Zelia Gomes de Gois Pinto, Vicaress of the Heart of Mary Province, made it a point to call on His Excellency. The warm reception they had and the resultant encouragement they enjoyed energized their dormant dream. At last, with the invaluable instructions and mellowed counsel on the best way to proceed with a view to commencing their activities in Cochin, the Vicaresses returned to their fold immensely pleased and enormously jubilant.

A number of difficulties, including the building of the General Curia made it impossible to realize this dream at once but the idea kept gaining ground. His Excellency Bishop Joseph Kureethara and the Superior General corresponded frequently. This regular communication helped keep the hope alive and slowly bring it to fruition. In November 1995, Bishop Kureethara made his next visit to Lisbon, together with Rev. Fr. Denson Oliver and Miss Maria de Lourdes Rosa who had worked in the Archives of the Cochin Diocese.

His Excellency called at the Generalate of the Sisters of Victories on November 9 and celebrated Holy Mass in their new General Curia Headquarters, a gesture for which they felt deeply honoured. It so happened that while the Bishop of Cochin was in Lisbon, Rt. Rev. Dr. Soosai Pakiam, Bishop of Trivandrum, together with Rev. Fr. Sylvester Ponnumuthan was at their convent in Rome. To make a long story short, the Sisters at last decided to open their first House in Cochin itself.

The Bishop gave them further encouragement and clear indication by extending a warm invitation to pay a visit to the Diocese at their earliest convenience. Honouring the invitation, the Superior General, Maria de Lurdes Nunes, accompanied by her Vicaress, Sister Ilda Ribeiro Gomes Tomas reached India in April 1966 and spent a week in Cochin. They spent a few days in the Diocese of Trivandrum also, as there had been some contact between the Bishop and some of their Sisters in Rome. Having studied the various aspects of the two possible openings, it was finally decided to opt for Cochin.

Thenceforth steps forward gained momentum and Sisters were delegated to this mission. Rev. Sisters Mericia Goncalves Pestana from the Province of Christ the King (Portugal), Sister Teresa Goncalves das Fontes from the Heart of Mary Province (Madeira) and Alda Mate, from the Province of Our Lady of Fatima (Mozambique) were commissioned from Rome as missionaries to Cochin. Accompanied by the Vicaress General, Rev. Sr. Ilda Ribeiro Gomes Tomas, they arrived in Cochin on 20th October 1997.

They were warmly welcomed with manifest joy by Bishop Kureethara who cordially invited them to join him at the table to partake of the simple repast at supper. His Excellency had arranged their accommodation with the Franciscan Oblate Sisters at the St. Agnes Convent, Pandikudy. They were to remain there until the little house at Thoppumpady which was to be their first Home could be made ready. The following Saturday, 25th October 1997, witnessed the blessing and inauguration of the Victory Convent at the Catholic Centre, Thoppumpady.

Not wishing to abuse the generous hospitality of the Diocese and anxious to secure better conditions for the reception of new vocations the territory seemed to promise, the Congregation, helped by Fr. Joppy Koottumkal, Procurator of the Diocese, acquired at Chellanam, a plot of land with a large house where formation could begin.

It was necessary to undertake repairs and enlarge the house to some extent to make it suitable for the purpose for which it was intended. This work was carried out under the direction of Fr. Joppy and is now almost complete, the house itself having been occupied since July 31, 1999. The nostalgic longing of the Congregation of Franciscan Sisters of Victory to plant a branch in India, native soil of their Foundress, thus found the right location for its bed in the coastal village of Chellanam.

God inspired in Sister Mary of St. Francis Wilson a form of evangelical life illuminated by the example and rule of St. Francis of Assisi centred on charity and totally absorbed in seeking the glory of God in concrete and creative display of love for fellowmen. The Franciscan Sisters of Our Lady of Victories, who imbibe this spirit, continue today to live this form of life, doing all the good they possibly can wherever they are. Fully conscious of the truth that "God is our Father and best Friend", they want to make Him known and experienced as such by all, so as to reawaken hope in people's hearts and lead them to believe in the final victory of God over every form of oppression and poverty.

They are thus called upon to proclaim the Gospel by means of the various activities they are involved. Their mission includes endeavours for the benefit of the elderly, the youth, children and families. Their field of work encompasses the sick, the poor and emigrants, the hospitals, old age homes, schools, seminaries and parishes. All their efforts are in collaboration with the local diocesan clergy and are fully incorporated into the local church. Always priority is given to what is most needed and most urgent, in church and in society. Thus they always have, as their one over-riding aim, the glory of God and the building-up of his Kingdom.